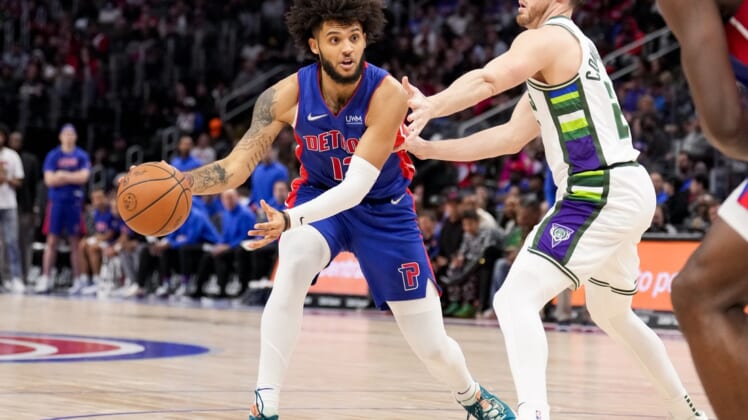 Giannis Antetokounmpo went for 30 points as the visiting Milwaukee Bucks defeated the Detroit Pistons 131-101 on Friday night to clinch at least the No. 3 seed in the Eastern Conference.

Antetokounmpo also had 13 rebounds and eight assists while shooting 9 of 16 from the field to lead Milwaukee (51-30) over Detroit (23-58) for the third time this season.

The Bucks now look toward Sunday afternoon, where they will have a chance to claim the No. 2 seed in the East with a win over Cleveland.

Shots were not falling all night for Detroit, as it shot under 40 percent from the field for the 19th time this season. The Pistons made good on just 35 of their 90 shot attempts (38.9 percent) and went just 10 for 48 from beyond the arc (20.8 percent).

Milwaukee was firing on all cylinders following halftime and led by at least 18 for the entirety of the second half.

Detroit got off to an abysmal start, making just three of its 21 field-goal attempts in the first quarter, which included a 0-for-14 performance from 3-point range. The Bucks capitalized on the cold start, jumping out to a 30-8 lead by the end of the frame.

Although the Pistons would trim the lead to eight in the second quarter, a 14-7 run over the final 5:28 of the first half sent Milwaukee into the break with a 56-38 cushion.

Middleton had 11 points through the first 24 minutes of action, while Holiday, Lopez and George Hill each added eight. The Bucks dominated down low, scoring 26 points in the paint compared to just 12 from Detroit.

McGruder led all first-half scorers with 14 points, and Cunningham added six for the Pistons. The bench played a major role, scoring 23 of Detroit’s first-half points.