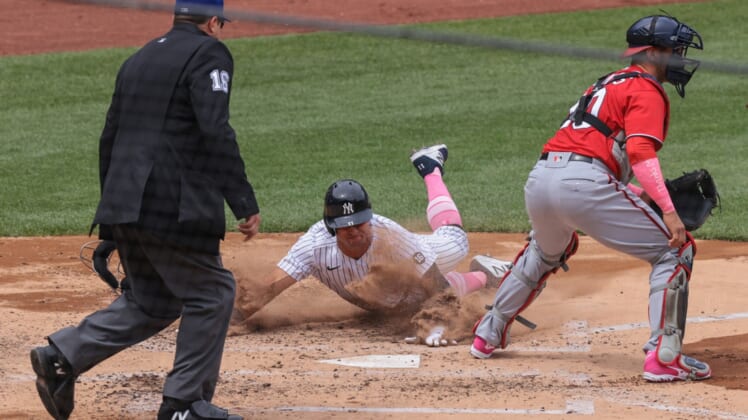 Giancarlo Stanton singled with one out in the ninth inning to give the New York Yankees a 3-2 victory over the Washington Nationals on Sunday at Yankee Stadium.

The Yankees started their rally against Brad Hand (2-1) when Tyler Wade and pinch hitter Aaron Judge drew walks. DJ LeMahieu beat out a double play grounder to move Wade to third and Stanton won it by sharply hitting a single into left field between shortstop Trea Turner and third baseman Starlin Castro as the infield was in for Washington.

It was Stanton’s seventh career game-ending hit and second since joining the Yankees following the 2017 season in a trade with the Miami Marlins.

The Yankees posted their second straight win in their last at-bat, improved to 12-5 since opening the season with 11 losses in 17 games and also capped a 7-2 homestand.

After blowing a 2-0 lead, New York staged a rally against Hand for the second straight day. It was Hand’s second straight blown save after he converted his previous 24 regular-season save chances.

New York’s Domingo German took a shutout into the seventh before the Nationals’ Kyle Schwarber hit a two-run homer to tie the game. German allowed two runs on five hits in 6 1/3 innings with one walk and six strikeouts.

Washington’s Joe Ross allowed two runs on three hits in five-plus innings. He was lifted in the sixth after Gary Sanchez followed a Gleyber Torres home run by drawing a walk.

The Yankees took a 1-0 lead in the third when Hicks followed two walks by lining an RBI single to center field. Torres made it 2-0 in the sixth when he hit a 2-0 sinker into the left field bleachers for his first regular-season homer since Sept. 17 against the Toronto Blue Jays.

After Josh Bell opened the seventh with a double to left-center field, Schwarber reached the second deck in right field by hitting a 1-2 four-seam fastball for his third homer.