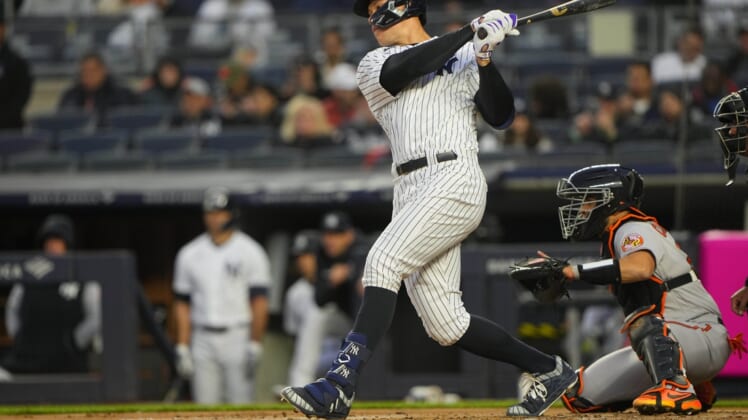 Giancarlo Stanton hit a two-run homer to reach 350 career homers and lifted a tiebreaking sacrifice fly in the sixth inning as the host New York Yankees beat the Baltimore Orioles 5-2 on Wednesday night.

Stanton reached the milestone in his 1,341st career game when he hit a two-run homer off Tyler Wells four batters in. Before the home run, he entered with four hits in his previous 31 at-bats and no homers in his prior 14 games.

According to the Elias Sports Bureau, the only players who reached 350 homers faster were Babe Ruth, Albert Pujols, Harmon Killebrew, Alex Rodriguez, Juan Gonzalez and Mark McGwire. Stanton also joined Alex Rodriguez and Babe Ruth as the third player to get their 350th career homer with the Yankees.

Stanton’s milestone homer helped the Yankees win their fifth straight and for the seventh time in eight games.

Anthony Santander hit a tying two-run homer in the sixth for the Orioles, who dropped their third straight. After Santander homered for the second straight game, the Yankees had first and third against Joey Krehbiel (1-2) following a single by Anthony Rizzo.

Stanton followed with a fly ball to the warning track in center field off Felix Bautista that easily scored DJ LeMahieu, who led off the frame with a walk.

Joey Gallo also homered for the second straight game when he opened the seventh with a drive to right. Gallo’s homer gave the Yankees a 4-2 lead and New York added another run when Isiah Kiner-Falefa scored on a wild pitch by Dillon Tate.

Michael King (2-0) followed with 2 1/3 innings. It was his first appearance since striking out seven consecutive hitters in Friday’s 4-1 win over the Cleveland Guardians.

Clay Holmes worked a perfect ninth for his second career save.

Wells allowed two runs and three hits in five innings. He struck out four, walked none and threw a career-high 72 pitches.