Gerrit Cole, Yankees hope to get back on track vs. Rays 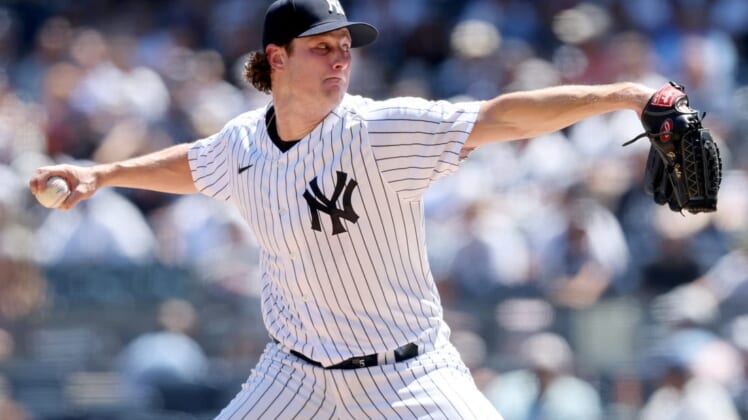 The last time Gerrit Cole appeared on the mound at Yankee Stadium, his teammates faced a six-run deficit before taking an at-bat and the right-hander was extremely frustrated with a difficult performance.

Like Cole’s last home start, the Yankees are coming off some frustrating outcomes.

New York is 8-15 since the All-Star break and returns home to open a three-game series Monday night against the visiting Tampa Bay Rays following a 2-7 road trip through St. Louis, Seattle and Boston. The nightmarish trip ended with a 3-0 loss in Boston Sunday night when the American League East leaders mustered just two singles.

“We’re obviously not playing the way we want,” New York starting pitcher Jameson Taillon said. “But we put ourselves in a nice position at this point in the season. But everyone’s working hard to pull their weight and turn this thing around right now.”

Cole (9-4, 3.38 ERA) is coming off consecutive outings of mixed results to the Seattle Mariners where he opposed Luis Castillo each time. On Aug. 3, Cole allowed three homers in the first inning of a 7-3 loss, and Tuesday he allowed four hits in seven innings before the Yankees lost 1-0 in the 13th in Seattle.

Cole is 0-2 with a 5.04 ERA in four starts since the All-Star break although Tuesday was the best of those outings. Before his sixth scoreless start this season, Cole allowed 15 runs (14 earned) and 23 hits in his previous three outings.

New York is 7-3 against the Rays this season after going 10-19 against them in the previous two seasons.

Tampa Bay enters its series in New York coming off consecutive wins over the visiting Baltimore Orioles. After opening the series with a 10-3 loss, the Rays got dominant pitching performances from Shane McClanahan and Drew Rasmussen.

“You want to go in playing well,” Rays manager Kevin Cash said. “I know the guys will be excited to get to New York and play a team that’s been really, really good this year.”

McClanahan allowed two runs in six innings Saturday and Rasmussen was even better Sunday, coming within three outs of a perfect game and tossing a combined one-hitter in a 4-1 win.

Randy Arozarena hit a three-run homer and has three homers in his past four games. So far, he is 5-for-32 (.156) against the Yankees this season.

The performances by McClanahan and Rasmussen created a favorable situation for Tampa Bay’s pitching staff, especially since an opener may be deployed Monday followed with Ryan Yarbrough appearing as a bulk reliever.

If Yarbrough does appear, he is seeking his first win after dropping to 0-7 when he allowed three runs in 3 1/3 innings in Tuesday’s 5-3 loss to the Milwaukee Brewers.

Yarbrough is 5-3 with a 2.53 ERA in 10 appearances (two starts) against the Yankees, whom he fired a six-hitter against in his last appearance in New York on June 3, 2021.