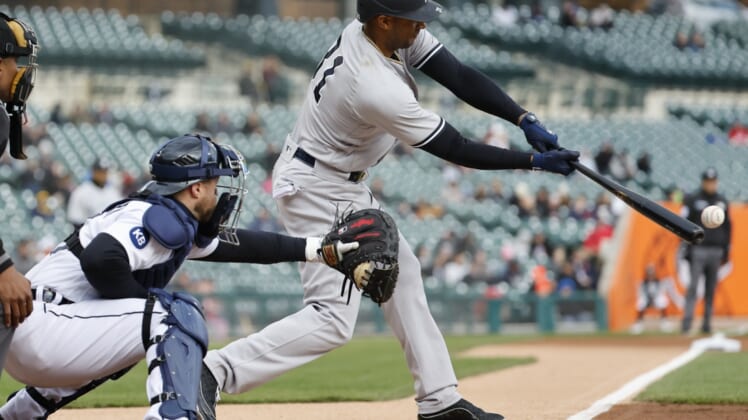 Yankees ace Gerrit Cole lasted just 1 2/3 innings, as he walked five batters and gave up two runs while throwing 68 pitches. Schmidt (1-2) struck out six before three other relievers bridged the gap to Aroldis Chapman, who recorded his second save by retiring the side in order during the ninth inning.

Hicks reached base three times, scored two runs and drove in another.

The Yankees caught a break to take a 2-0 lead in the first. Hicks led off with a single and moved up on Anthony Rizzo’s one-out walk. After a strikeout, Tigers starter Tyler Alexander (0-1) walked DJ LeMahieu to load the bases. On a 3-2 pitch, Josh Donaldson hit a popup between the mound and home plate. Alexander tried a basket catch, but the ball popped out of his glove as two runs scored.

Alexander was replaced by Rony Garcia in the second inning, but Garcia was injured after throwing a wild pitch that allowed Isiah Kiner-Falefa to reach third. Will Vest took over with one out in the inning and gave up a sacrifice fly to Hicks.

Cole threw 46 pitches in the second, a career high for any inning. He gave a leadoff single to Miguel Cabrera and issued three consecutive one-out walks, the final one forcing in a run. Robbie Grossman hit a sac fly and Austin Meadows drew another walk to end Cole’s night.

Schmidt replaced him and struck out Jonathan Schoop to leave the score 3-2.

The Tigers had two runners in scoring position with one out in the seventh. However, Schoop was thrown out at home on Cabrera’s infield chopper and Clay Holmes then struck out Spencer Torkelson.

New York tacked on an insurance run in the ninth. Hicks drew a walk against Joe Jimenez, stole second and scored on LeMahieu’s two-out single.