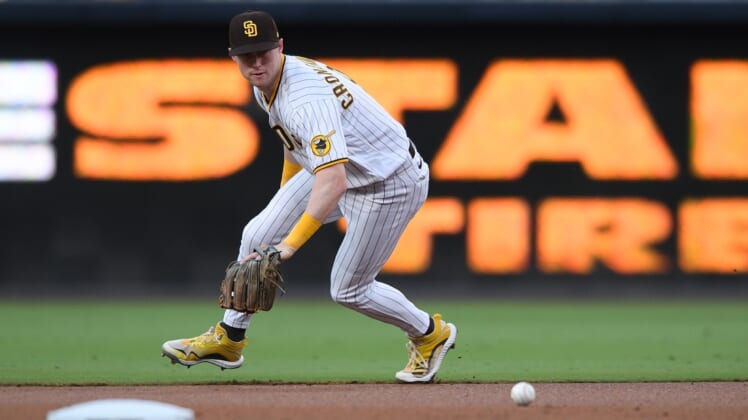 Colorado All-Star right-hander German Marquez shut out San Diego over seven innings and scored the game’s first run Saturday night as the visiting Rockies blanked the Padres 3-0 to even their three-game series at 1-1.

Marquez (8-6) issued only one walk and struck out nine Padres. He threw 86 pitches with 58 for strikes. Marquez struck out the side in the fourth during a run of retiring 10 straight Padres. Eric Hosmer was the only Padre to reach second against Marquez with a two-out double in the second.

Marquez’s one-out single off Padres’ starter Joe Musgrove triggered the Rockies game-winning rally in the fifth. But it was a pair of poor fielding plays by Hosmer at first that resulted in the two runs.

With Marquez on first, Raimel Tapia hit a grounder to Hosmer that ricocheted off the former Gold Glove winner for an error. Garrett Hampson then rolled a single up the third-base line to load the bases.

Charlie Blackmon hit another grounder to the right side that got past a diving Hosmer for a two-run single that drove Musgrove from the game. The right-handed Musgrove (5-7) gave up two runs (one earned) on five hits and two walks, with six strikeouts in 4 1/3 innings.

Colorado added a third run in the seventh against Padres reliever Pierce Johnson. Tapia drew a lead-off walk, advanced to second on a wild pitch, moved to third on a bunt single by Hampson and scored on a sacrifice fly to right by C.J. Cron.

The Padres threatened in the bottom of the eighth against right-handed reliever Carlos Estevez. Hosmer opened the inning with his second double of the night and reached third with one out on Victor Caratini’s second single of the game. But Estevez struck out pinch-hitter Brian O’Grady and retired Tommy Pham on a grounder to second.

Right-hander Daniel Bard retired the Padres in order in the ninth to pick up his 13th save in 18 chances.