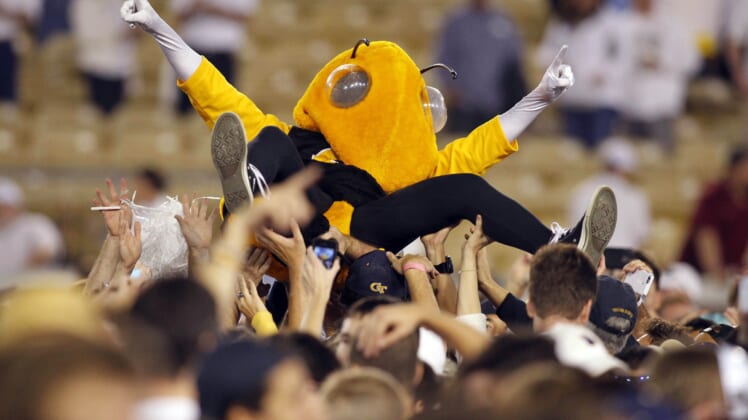 The Georgia Tech football team’s home opener is setting up to be a potentially emotional one for reasons having nothing to do with football. The school is offering free tickets to the game against Jacksonville State to people being forced to evacuate Florida, South Carolina and Georgia counties as Hurricane Irma approaches.

We’re inviting anyone evacuating to #ATL due to #HurricaneIrma free tickets to tomorrow’s #JSUvsGT game https://t.co/cX6pn51zOC

The school announced Friday that people from those counties who might be looking for a way to take their minds off the impending natural disaster can pick up free tickets starting on Saturday morning at 9:30 a.m. ET. They can pick them up at the Brittain Dining Hall lawn, which is located on Techwood Drive, directly across from Gate 9 at Bobby Dodd Stadium. The announcement comes with the stipulation that “tickets are available on a first-come, first-served basis while supplies last. All that is needed to claim tickets is a valid state-issued I.D.”

“As a former resident of both Houston and Florida, my wife, Karen, and I personally have a lot of friends, former student-athletes and former colleagues in both areas and have been following Hurricanes Harvey and Irma closely. We have the deepest sympathy for everyone who has been affected by the storms,” said Stansbury, who previously served as associate athletics director at the University of Houston and director of athletics at the University of Central Florida. “Our hope is that a day of family fun and great college football can be a much-needed distraction for families displaced by Irma. Additionally, Georgia Tech athletics will be looking to help those affected in any way that we can.”

Irma is scheduled to hit Florida on Sunday, and it’s still a monstrous Category 4 hurricane that will likely power back up to a Category 5 before landfall. State officials are doing everything in their power to get people to realize just what kind of threat is coming their way.

Hurricane Irma ripped through the Caribbean as a Category 5 storm, whipping up sustained winds of 185 miles per hour for longer than any other Atlantic Ocean storm in recorded history. At least 20 people have died during the storm thus far, per the New York Times, and Florida Gov. Rick Scott said would be “way bigger than Andrew,” which was a catastrophic storm that demolished Florida communities in 1992.

This is the difference in size between 1992's Hurricane Andrew and Hurricane #Irma https://t.co/OC6qt4wGNV pic.twitter.com/MhoMxl2320