Georgia Tech hoping to put up a fight at No. 6 Clemson Tigers

It didn’t take long for Georgia Tech’s coaches to assess No. 6 Clemson ahead of Saturday’s clash in Clemson, S.C., the Atlantic Coast Conference opener for both teams.

“They’ve got really good players completely across the board,” Yellow Jackets coach Geoff Collins said. “They don’t have holes in their roster; they have big-time players at every position.”

Collins is hopeful that Georgia Tech (1-1, 0-0 ACC) has improved to the point where it can at least mount some semblance of a challenge to Clemson (1-1, 0-0), something it hasn’t done in quite some time.

After losing five of their first eight games against Georgia Tech under coach Dabo Swinney, the Tigers have outscored the Yellow Jackets 267-83 in sweeping their last six meetings, including a 73-7 victory last season that set an ACC record for margin of victory in a conference game.

Clemson is seeking a second consecutive victory after opening the season with a 10-3 loss against Georgia. Georgia Tech also is looking for back-to-back wins after a season-opening 22-21 loss to Northern Illinois. 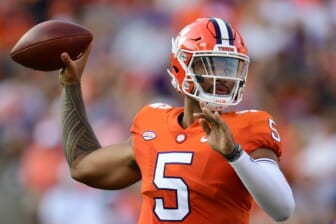 “We’re excited about ACC play kicking off,” Swinney said. “We’ve got seven straight conference games. Our next goal is simple — win the division. But we know we’ve got a lot of improving to do to be the type of team we want to be.”

The Tigers found some offensive consistency last week in a 49-7 victory against FCS South Carolina State, averaging 6.7 yards per rush. The star was freshman running back Will Shipley, who had 80 yards and two touchdowns on only eight carries to spark a Clemson rushing attack that amassed 242 yards.

But the Tigers’ calling card may be their veteran defense, which hasn’t allowed a touchdown through two games and held South Carolina State to nine first downs.

Clemson also has won 29 consecutive games at home — a school record and the longest active such streak in the Football Bowl Subdivision.

“We’ve got to get ready for the next one and the next one just happens to be one of the best teams in the country — great coaches, great players, great environment,” Collins said. “It’ll be a packed house I’m sure, so we know we have our work cut out for us.”

Swinney, meanwhile, is convinced that the Yellow Jackets are much improved.

“They’ve bounced back and that’s a sign of their maturity as well,” Swinney said. “You can see that belief growing in what they do.”

After the stunning loss to Northern Illinois, which converted a two-point conversion with 38 seconds remaining, Georgia Tech throttled Kennesaw State 45-17 behind freshman quarterback Jordan Yates. Yates, who replaced sophomore Jeff Sims, who was sidelined with an arm injury, completed 17 of 23 passes for 254 yards against the Owls and became the first Georgia Tech player to throw four touchdown passes in the first start of his college career.

“Offensively they have seven guys who have started at least five games for them,” Swinney said. “At quarterback they obviously have two guys. I expect both of them to play. Yates is a very savvy guy and both of them are good runners. It will be a good challenge for our defense.”