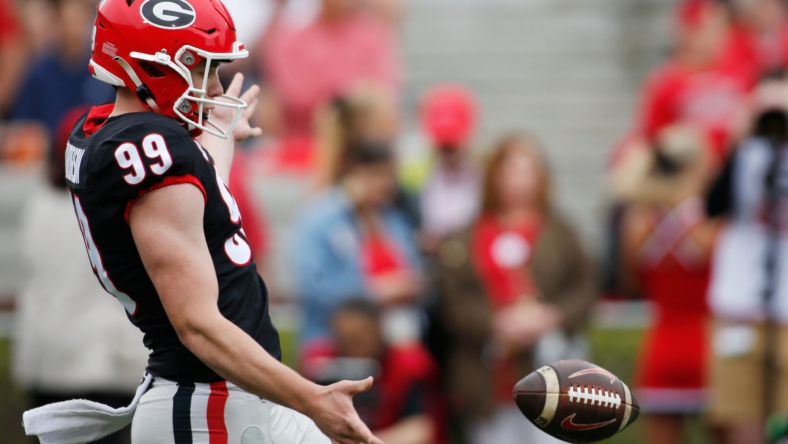 In what may be the best college football matchup of the year, the top-ranked Tennessee Volunteers are in Athens today, battling the Georgia Bulldogs. Both teams, sitting undefeated, are playing for the hopes of establishing their spot in the College Football Playoff.

Bulldogs punter Brett Thorson may have stolen the show, at least early on.

While everyone’s tuning in to see Tennessee’s top-ranked offense take on the nation’s second-best scoring defense, instead, the spotlight shines on a punter of all positions.

Facing their first three-and-out of the day, Georgia managed to turn what appeared to be a momentum-swinging play entirely in their favor. Facing a 4th-and-4 at the 24-yard-line, freshman punter Brett Thorson uncorked a 75-yard boot to pin the Vols on their own one-yard line.

Watch the play here, where the ball just continues to roll after Tennessee’s punt returner Dee Williams opted not to catch the punt. It ended up being a massive mistake, but obviously, he had no way of knowing the ball would take such a generous roll for the Bulldogs.

The punt was the 10th longest in Georgia football history, according to the CBS broadcast, and as expected, former NFL punter Pat McAfee absolutely loved it.

What a way to boost the brand, as McAfee likes to say. The following Tennessee possession ended about the way you’d imagine with a team backed up on their own goal line with a sliver of their playbook available in such a situation.

Tennessee would go three-and-out before having to punt after Hendon Hooker was stripped of the ball thanks to a Jalen Carter sack, reinforcing his projected draft position.

While the punt was extraordinary, we’re hoping for a lot more explosive plays, hopefully ending in touchdowns during this SEC battle.