Georgia HS football powerhouse under fire, stripped of wins in 2020 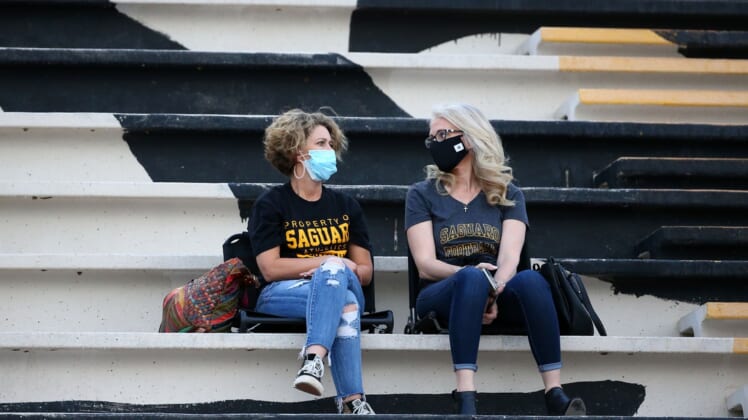 High school football powerhouse Valdosta (Ga.) was stripped of seven wins in 2020 and banned for the 2021 postseason for allegedly participating in a pay-for-play scheme orchestrated by its head coach to lure transfers.

Valdosta was fined $7,500 by the Georgia High School Athletic Association and several players are ineligible to play pending an appeal of the sanctions.

The sanctions are separate from previous GHSA rulings. Quarterback Jake Garcia was ruled ineligible because his move to the area was ruled illegitimate. He is a top 20 recruit via ESPN and 247Sports and already has enrolled at Miami (Fla).

ESPN reported GHSA executive director Dr. Robin Hines confirmed the details of the new investigation, which was launched after a secret recording of coach Rush Propst asking for “funny money” from the booster club was released.

Propst is on administrative leave as the Valdosta Board of Education weighs his future.

During the alleged call detailed by ESPN, Propst reportedly can be heard asking former booster club executive director Michael “Nub” Nelson in May for money to pay expenses for well-regarded players moving to the area to play for his team.

Nelson signed a sworn deposition in which he accuses Propst of making requests for multiple players, including $2,500 per month to pay expenses, including rent, to allow Garcia and his father to move from California to Valdosta.

Ethics issues have followed Propst from his two previous positions.

He won two state titles at Colquitt County High but his 11-year run ended under controversy and sparked an investigation by the Georgia Professional Standards Commission. He was fired by the school board for alleged ethics violations in 2019.

Propst coached Hoover High in Alabama, where he won five state titles but resigned in 2007 under public pressure when it was learned he was supporting another woman financially. Propst was married with children, but later divorced his wife and married the alleged mistress, ESPN reported.