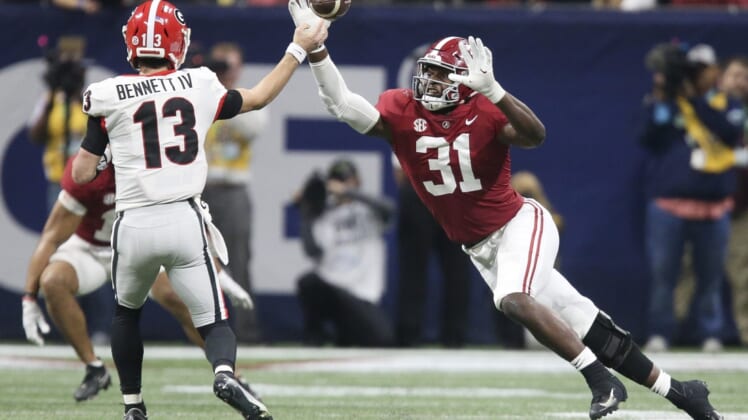 Bennett was MVP of the Orange Bowl on New Year’s Eve in a performance that hushed some of the criticism that emerged following Georgia’s loss to Alabama in the SEC championship game.

Bennett was 20 of 30 for 313 yards and three touchdowns in the Bulldogs’ beatdown of Michigan last week. And he was brave and accurate in the face of pressure from the Wolverines. That could be a sign of progress for Monken, Georgia’s offensive coordinator. When facing pressure against Alabama in the SEC title game in December, Bennett had 10 incompletions in 15 attempts. His five completions went for 60 yards with an interception, and he was sacked three times.

“I don’t see it as those two games are going to predict the future. I don’t see it that way,” said Monken on Wednesday in Indianapolis, noting the former walk-on who left Georgia for junior college but returned also has two very good statistical halves out of four against Alabama.

“He has everything we need to be successful offensively. And our issues with turnovers aren’t his issue, particularly. That’s everybody in this country — if you turn the ball over you’re not going to win, no matter how you do it. The first turnover a year ago was a batted ball that was out of his control. The second interception was a tipped pass on an end cut that went directly to them. The third one was a poor decision. So the bottom line is I can do better as a coordinator to put him in better position to be successful. He understands that. Our team understands that. So I expect him to play well just like I did last week.”

Bennett has 10 touchdown passes in the past three games.

But keeping up with Alabama has been a challenge for Georgia — and many others — on the biggest stage.

Georgia linebacker Quay Walker is an essential ingredient for the Bulldogs’ bid to stop Alabama on Monday.

In the previous meeting, the Bulldogs largely survived on a drop zone look that kept eyes on Heisman Trophy winner Bryce Young at quarterback. But missed tackles and busted coverage fed the Crimson Tide’s big-play offense and Georgia played second fiddle in the SEC.

“Since being here I’m 0-3 against them,” Walker said Wednesday. “So that felt pretty bad. But knowing that we didn’t have any sacks, knowing we didn’t have any sacks on defense, any turnovers, more than likely you’re not going to win that game if you don’t do those types of things. So at the end of the day I pretty much already knew. They were pretty much the team that day we didn’t execute on those types of things. As bad as I want to say it hurt, it did I kind of pretty much already knew why we didn’t win the game. I knew the mistakes we already made that led up to that.”

Walker said Georgia is not listening when “people outside of the team” mention the defense went from being historically good statistically to merely mortal against Alabama last month.

“At the end of the day, we just have to prove to ourselves, me proving to those other 10 guys that I’m out there on the field with and the offense as well as a whole team. We have nothing to be worried about about proving to anybody else outside of this building, outside of this team,” Walker said.

Walker won’t take it quite as far as Bennett, who can easily ignore social media because he’s a 23-year-old pocketing a flip phone. The device is, perhaps obviously, nothing new. Bennett said he had the same phone prior to the season.

“Yes, having a flip phone — I don’t think you really care too much about the outside noise and social media,” Walker said.