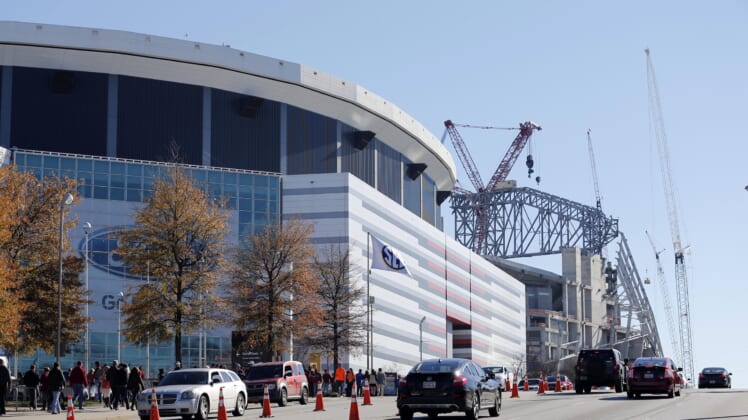 The Georgia Dome, home of the Atlanta Falcons the past 25 years, is going to be no more as of November 20, 2017, which is the new date for its implosion.

According to the official website of the Mercedez-Benz Stadium, construction on the shiny new stadium (which features an interesting metal sculpture) has it on track to open on August 26. That is the date of a Falcons preseason game (Week 3) against the Arizona Cardinals.

With the new stadium moving along on schedule, the AMB Group is now moving forward with the deconstruction of the Georgia Dome.

“Significant progress on Mercedes-Benz Stadium is achieved every day and we’ve hit a few exciting milestones on the roof over the last week,” said Steve Cannon, chief executive officer of AMB Group, LLC. “With strong confidence, we’ve asked the contractors to move forward getting the Georgia Dome ready for implosion on Nov. 20.”

The Georgia Dome originally opened in 1992. In addition to hosting the Falcons, it has been utilized for multiple NCAA Tournament Final Fours and hosted men’s basketball during the 1996 Summer Olympics. The Georgia Dome has also hosted international soccer matches and hosted WrestleMania XXVII.

The area that the Georgia Dome now sits on will be turned into “a green space known as The Home Depot Backyard.” The area will be utilized for parking and tailgating for Falcons and Atlanta United home games during their respective seasons.  It will also be “activated as a community space on non-game days throughout the year once complete.”