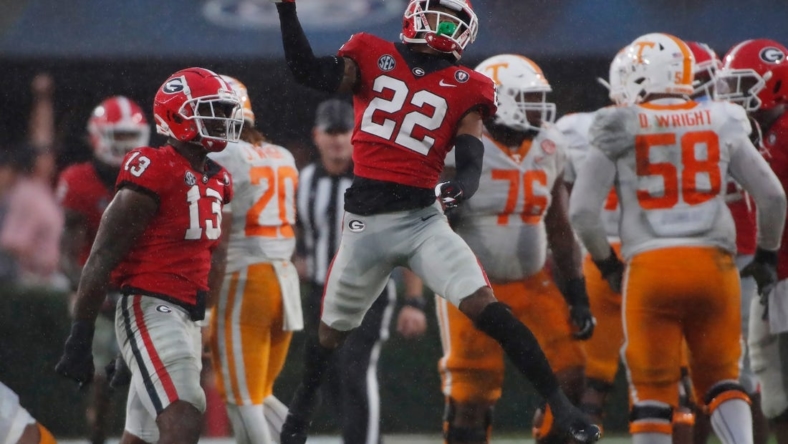 Georgia received almost near-unanimous confirmation as it remained atop the Associated Press Top 25 poll on Sunday after a win over previous No. 2 Tennessee.

The undefeated Bulldogs (9-0) captured 62 of 63 first-place votes after their convincing 27-13 win over the Volunteers in Athens, Ga., on Saturday. Tennessee fell to No. 5 in the poll and undoubtedly will drop when the next College Football Playoff rankings are released Tuesday night.

In last Tuesday’s CFP rankings — the first of the season — the Volunteers held the No. 1 spot, followed by Ohio State and Georgia.

Ohio State (9-0) claimed the remaining first-place vote in the AP poll and the No. 2 slot despite struggling in a 21-7 defeat of lowly Northwestern on Saturday. The Buckeyes’ Big Ten rival, Michigan, moved up to No. 3, followed by TCU.

Both the Wolverines and Horned Frogs are 9-0.

Rounding out the Top 10 are No. 6 Oregon, followed by LSU, Southern California, UCLA and Alabama.

LSU defeated Alabama Saturday night, 32-31, when Tigers coach Brian Kelly made a gutsy decision to go for a two-point conversion instead of kick the extra point in overtime. As a result, LSU rose eight spots in the poll and the Crimson Tide fell by four.

Kansas State plunged 10 spots to No. 23 after a loss to Texas, which re-entered the rankings at No. 18. Also returning was No. 20 Notre Dame, which dominated previously unbeaten Clemson. The Tigers fell seven spots to No. 12. They were No. 4 in the first CFP rankings.

Also falling seven places was No. 21 Illinois after a loss to Michigan State.

No. 24 Washington and No. 25 Florida State entered the Top 25. Oklahoma State, Wake Forest, Syracuse and Oregon State all fell out.