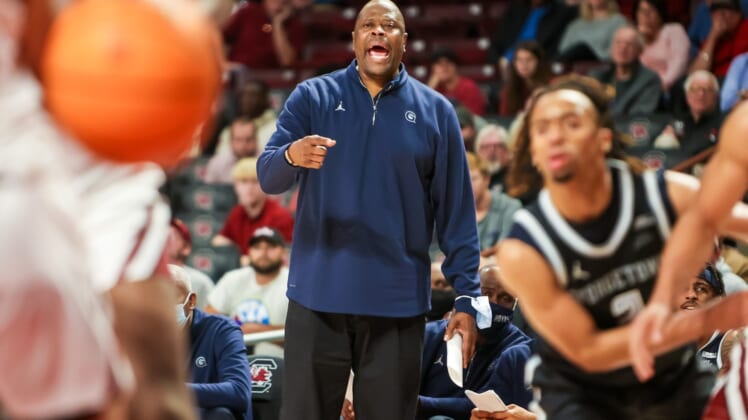 With facemasks on tight and fingers crossed, Georgetown hopes to finally get its Big East Conference season off the ground on Friday evening when it hosts Marquette.

Georgetown (6-5, 0-0) expected to be busy during the holidays. But four straight COVID-19 scratches — all conference games — have left the Hoyas idle for nearly three weeks.

On Wednesday, the team had its first full practice in more than two weeks.

“We’ve been shut down because we had a lot of guys with COVID,” coach Patrick Ewing said. “There wasn’t too much we could do.”

Ewing has been haunted by COVID-19. He was hospitalized for the virus in May of 2020. Last year, four straight Hoyas games were canceled, leaving the team idle for 20 days in January. The story had a happy ending as Georgetown streaked to an improbable title in the Big East tournament.

But the Hoyas haven’t played a conference game since then. Meanwhile, Marquette (9-6, 1-3 Big East) has had four, including Tuesday’s stunningly decisive 88-56 win over No. 16 Providence, a breakthrough for the Golden Eagles under first-year coach Shaka Smart.

Smart has assembled a talented cast that includes grad transfers Darryl Morsell (Maryland) and Kur Kuath (Oklahoma), who had seven blocks against Providence.

Tyler Kolek, the Atlantic-10 rookie of the year last season at George Mason, had nine assists against Providence. In his second season at Marquette, powerfully built Justin Lewis leads the team in points (15.7 per game) and rebounds (8.2 per game).

Georgetown will try to match Lewis with its own blossoming talent, Aminu Mohammed, who averages 14.6 points and 8.7 rebounds per game, both team highs.

The Hoyas are dangerous when 3-point threats Kaiden Rice — 42.6 percent accuracy from beyond the arc — and Donald Carey (47.3 percent) are hot.

One bit of good news for Georgetown during its inactivity was the addition of Wayne Bristol Jr., a transfer from nearby Howard and a former MEAC rookie of the year. Georgetown is trying to determine if Bristol is immediately eligible, Ewing said.