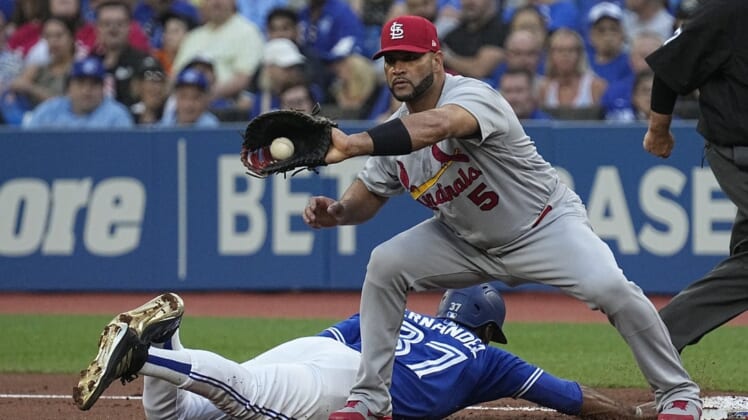 Vladimir Guerrero Jr. hit a two-run home run and Alejandro Kirk added a solo shot for the Blue Jays, who have won seven in a row.

Dylan Carlson hit a solo home run for the depleted Cardinals, who have lost two in a row.

Carlson hit his sixth home run of the season with one out in the first.

Springer led off the bottom of the first with a single and Guerrero hit his 21st home run of the season. Bo Bichette doubled, took third on Teoscar Hernandez’s single and scored on Matt Chapman’s single.

St. Louis tied the game in the top of the third. Lars Nootbaar led off with a walk, Tommy Edman singled and Carlson and Albert Pujols each had an RBI single.

After Corey Dickerson’s two-out single in the sixth put runners at the corners, Tim Mayza (5-0) replaced Berrios and ended the inning on a groundout.

Jordan Hicks (2-5), who pitched a perfect bottom of the fifth, allowed one run in the sixth on singles by Hernandez, Lourdes Gurriel Jr., who was out trying to reach second, and Chapman. Two walks loaded the bases and Junior Fernandez replaced Hicks and allowed Springer’s 18th home run of the season.

David Phelps pitched a clean top of the seventh.

Kirk led off the bottom of the seventh with his 12th homer of the season. Bichette doubled and scored on Santiago Espinal’s two-out single to give Toronto a 10-3 lead.

Max Castillo pitched around a walk in the top of the eighth.

Jeremy Beasley pitched around an infield single and two walks in the top of the ninth.

Paul Goldschmidt, Nolan Arenado and Austin Romine were not with the Cardinals because they were not vaccinated against COVID-19. Ivan Herrera, Cory Spangenberg and Conner Capel were called up as substitutes.