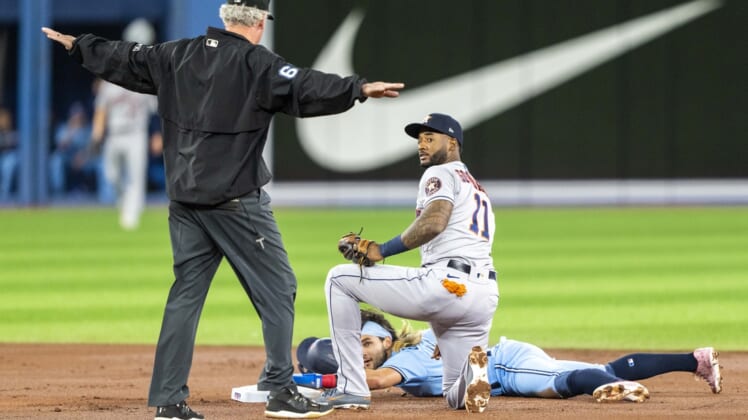 Yordan Alvarez hit a home run for the Astros, who had a four-game winning streak snapped.

Berrios (2-0) allowed one run, seven hits and two walks while striking out five in 5 2/3 innings. Jordan Romano earned his American League-high 10th save of the season with a perfect ninth that included a strikeout.

Along with Springer, Bo Bichette and Lourdes Gurriel Jr. had two hits each for Toronto. Chas McCormick and Kyle Tucker both had a pair of hits for the Aatros.

The teams have split the first two games of the three-game series.

Houston starter Luis Garcia (1-1) allowed two runs, five hits and one walk in six innings. He struck out five and hit a batter.

Springer led off the bottom of the first with a home run — his 46th career homer to lead off a game — and hit his sixth of the season with one out in the third.

Alvarez led off the fourth with his sixth home run of the season, a high blast to center.

Garcia allowed a single to Gurriel and a walk to Raimel Tapia to start the bottom of the frame, but escaped the threat, stranding runners at second and third.

The Asros started the fifth with singles by McCormick and Niko Goodrum. Berrios worked out of the inning and left runners at second and third.

Blue Jays manager Charlie Montoyo was ejected after Vladimir Guerrero Jr. was called out on strikes to end the fifth. Guerrero had slammed his bat to the ground.

Tim Mayza replaced Cimber with two out in the seventh and pitched around a walk. He later survived a two-out single in the eighth.