The Houston Astros have done all they can to try and excite their fans over the past few years. They moved to the American League, changed their uniforms back to a more retro look and called up their top prospects in a “we’ve got nothing to lose” approach. One of those top prospects, rookie outfielder George Springer, can’t shake the injury bug.

Springer was making progress and was close to a return to the Astros lineup. Fans in Houston haven’t had many reasons to cheer this season, but the rookie phenom has given them reason to believe. Before getting injured (again), Springer had 20 home runs and 51 runs batted in. Even though he is hitting just .231, he’s still in his first season in the big leagues, which makes these numbers awfully impressive.

Springer is just 24 years old and is considered to be one of the cornerstone pieces of the Astros franchise, along side Jon Singleton, for many years to come. In a year when the Texas Rangers, who are overwhelmingly the fan favorite in the state of Texas, have struggled mightily, the Astros were in a prime position to capture some new fans. 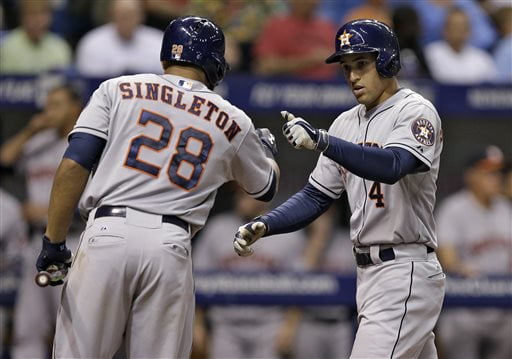 Springer and Singleton have huge potential for the Astros. Photo: bigstory.ap.org

Perhaps Springer can stay healthy for the month of September and provide some buzz heading in to 2015. Then again, the team may choose to shut Springer down if he continues to have lingering injuries. Caution is becoming more and more common in September throughout Major League Baseball.