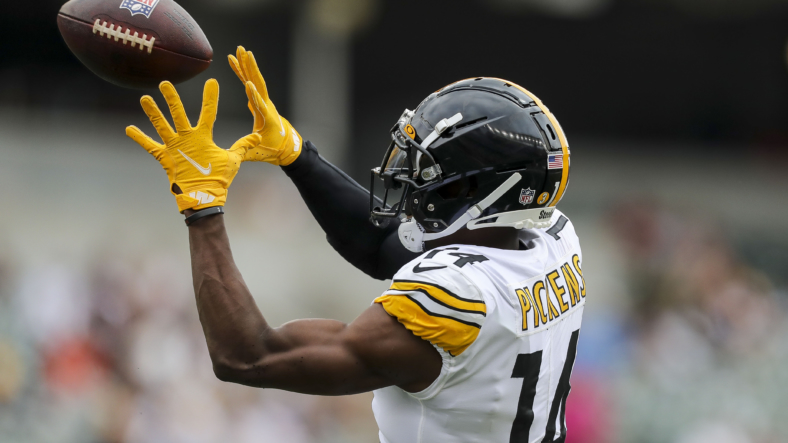 A second-round pick of the Pittsburgh Steelers this past April, George Pickens was a standout rookie during the preseason. Unfortunately, the young receiver didn’t see a ton of targets in the first two regular-season games leading up to Thursday’s contest with the Cleveland Browns.

In need of something to help jump start their offense, the Steelers changed that big time to open this Week 3 game. Boy, did Pickens respond accordingly.

With Pittsburgh down 7-0 late in the first quarter, Mitch Trubisky targeted Pickens on a second and three. The former Georgia star stepped up and made the catch of the young NFL season.

One-handed. Fully extended. Falling to the ground. It did not matter. Pickens was not going to let this ball hit the ground. He went full Odell Beckham Jr., and it was something to see. By virtue of this catch, Pittsburgh got into the red zone. It would ultimately score on a Najee Harris run a few minutes later, representing only the team’s third offensive touchdown of the season.

George Pickens needs to get more reps for the Pittsburgh Steelers

Ahead of Thursday’s game, the rookie actually displayed some frustration over not seeing a ton of targets in the first two weeks of the season.

“I just say that because I’m a big guy that runs in the low 4.4s. I always have a step on somebody and my step is naturally longer than the other person, and I’m actually fast. I’m always (going to) have a step and always feel like, 99 percent of the time, I’m open even though the ball gets there in the air and (the defender) gets time to catch back up. But I’m open as soon as I get off the line.”

George Pickens on lack of playing time, via the Pittsburgh Tribune-Review

The rookie isn’t wrong. As you can see in this angle of the catch below, Pickens schooled fellow rookie Martin Emerson Jr. off the line before making the amazing catch.

Pickens saw a mere five targets despite playing 95 snaps on offense through the first two games. Trubisky is finally looking in his direction.