Nov 9, 2021; Coral Gables, Florida, USA; A general view of a basketball on the court during the first half between the Miami Hurricanes and the Canisius Golden Griffins at Watsco Center. Mandatory Credit: Jasen Vinlove-USA TODAY Sports

High school basketball player Cameron Walker remained in custody Friday on murder charges in Fulton County, Ga., and officials at George Mason said they will not admit him to the university where he planned to play.

Walker, 17, and teammate Jonathan Murray, 18, were arrested Wednesday night after playing in their game in at Milton High School in suburban Fulton County. Police said they killed a 24-year-old man they intended to rob during a drug deal last month.

Both were denied bond Thursday in their first court appearance since being arrested on charges of criminal attempt to commit armed robbery and murder.

George Mason moved swiftly to cut ties with Walker, who signed to play at the Atlantic 10 Conference school on Nov. 10. 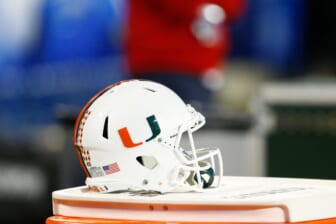 “We are devastated that a young person in Georgia lost his life and we send our heartfelt condolences to his family,” the university said in a statement. “We take these matters with the utmost level of seriousness. Cameron Walker’s family has been notified that he can no longer be considered for admission into the George Mason University men’s basketball program.”

Walker, a 6-foot-4 guard, was part of Milton’s team in 2020-21 that won the Georgia state title. The 6-7 Murray, a senior, was new to the school after moving from Alabama and also plays football, with an offer from Virginia, according to 247Sports.

Wednesday night’s game was the season opener for Milton, which entered the week ranked No. 1 in Georgia’s 7A division. Milton is a Georgia basketball powerhouse, and on its roster is senior Bruce Thornton, whom the 247Sports composite lists as the nation’s No. 6 prospect at point guard. He’s committed to Ohio State.

Police allege that on Oct. 14, Walker and Murray were responsible for the shooting death of Connor Mediate, 24, a 2020 graduate of Kennesaw State University. The Atlanta Journal-Constitution reported that arrests reports showed Walker planned to meet Mediate to purchase drugs in a parking deck, arranged via social media messages.

“The men were intending on robbing Connor Mediate and Connor was killed in the process,” read a statement in Walker’s arrest warrant. “At this point, it is unknown if Cameron Walker or Jonathan Murray actually shot Connor.”

Mediate was found with multiple gunshot wounds, and it is possible both Walker and Murray shot at him, the warrant states.

In a statement, the Alpharetta Police Department said, “The arrests follow an intense month-long investigation that identified the two Milton High School student athletes as the perpetrators.”