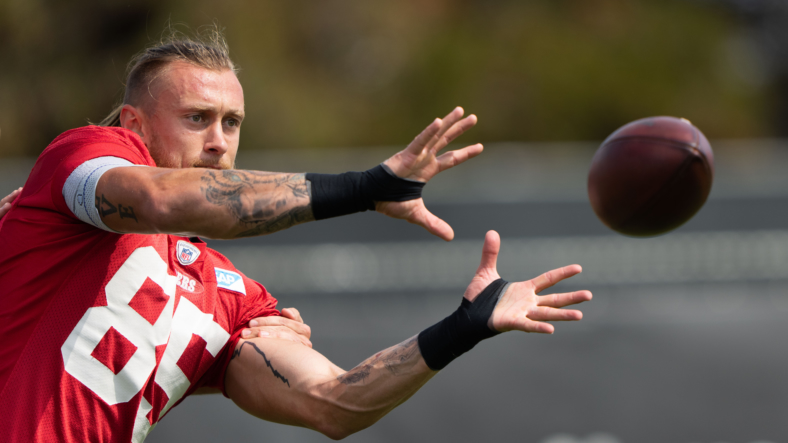 San Francisco 49ers star tight end George Kittle made a surprise appearance on the team’s injury report Wednesday with what is being described as a groin issue.

The All-Pro suffered said injury during practice on Monday. Now with just a few days to go before their season opener against the Chicago Bears, Kittle was not a participant in 49ers practice on Wednesday.

San Francisco head coach Kyle Shanahan touched on it during a Q&A with the media from Santa Clara after practice. To say that his update is concerning would be an understatement.

“Was hoping he’d be good today. Did a little on Monday and not feeling good today. So we’ll have to see day-by-day,” Shanahan to reporters on status of George Kittle for Week 1.

Aaron Wilson of Pro Football Network followed that up on Thursday with a report that Kittle is unlikely to play Sunday and could be out multiple weeks with a Grade 2 groin strain.

San Francisco is slated to start young quarterback Trey Lance under center at Soldier Field Sunday afternoon. The inexperienced signal caller will need all the help he can get following a summer filled with mixed reports surrounding the No. 3 pick in the 2021 NFL Draft.

Seen as one of the best all-around tight ends in the game, Kittle has played a full schedule just once in his first five NFL seasons. He missed three games to injury a season ago. San Francisco put up a 1-2 record in those three games.

In addition to Kittle bringing a lot to the table in the passing game, he’s one of the best blocking tight ends in the NFL. If the All-Pro is forced to miss substantial action, it will have widespread ramifications. That’s magnified with San Francisco’s questionable offensive line play and injury issues at running back.

If George Kittle can’t suit up Week 1 against Chicago, backups Charlie Woerner and Ross Dwelley would likely split time at tight end. The two combined for a mere nine receptions a season ago.

From a fantasy perspective, Kittle’s absence would likely lead to a larger target share for wide receivers Deebo Samuel and Brandon Aiyuk while impacting Lance’s ability to make much of an impact.