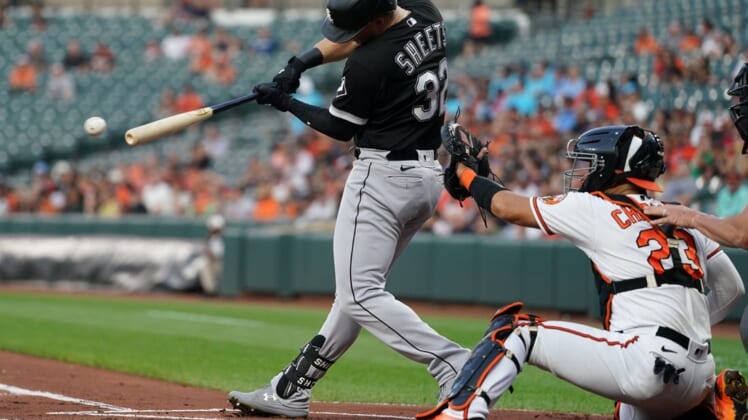 Gavin Sheets drove in three runs and Lucas Giolito allowed one run over 6 1/3 innings as the Chicago White Sox beat the host Baltimore Orioles 5-3 on Wednesday.

Sheets had a two-run single in the first inning and a run-scoring infield single in the seventh. He finished 3-for-5 for the White Sox, who also got two hits apiece from Jose Abreu and Romy Gonzalez.

Sheets’ outburst was plenty for Giolito (10-7), who allowed four hits and two walks while striking out three.

The right-hander exited with one out and runners on first and second in the seventh. Kendall Graveman entered and loaded the bases by walking Rougned Odor, but he got out of the jam by inducing a double-play grounder from Jorge Mateo.

The White Sox scored their lone runs against Baltimore right-hander Spenser Watkins (4-4) in the first inning. After Andrew Vaughn singled to right with one out and Luis Robert walked, the runners each advanced a base on Abreu’s single before Sheets’ single to center gave Chicago a 2-0 lead.

The Orioles cut the deficit in half in the fourth inning.

After Adley Rutschman led off by doubling off the right field wall, he took third on Anthony Santander’s flyout and pulled the Orioles to within 2-1 by scoring on Ryan Mountcastle’s groundout to shortstop.

Watkins kept the White Sox off the scoreboard after his rocky first inning. He lasted six innings and allowed two runs on five hits to go along with five strikeouts and two walks.

The White Sox extended their lead in the seventh.

After Seby Zavala walked and AJ Pollock struck out, Vaughn walked and Robert singled to load the bases.

Baltimore right-hander Bryan Baker struck out Abreu for second out, then was replaced by left-hander Keegan Akin, who gave up an infield single to Sheets that scored Zavala.

Austin Hays hit a two-run home run in the ninth off White Sox closer Liam Hendriks to cap the scoring.

Cedric Mullins and Mountcastle each went 2-for-4 for the Orioles.