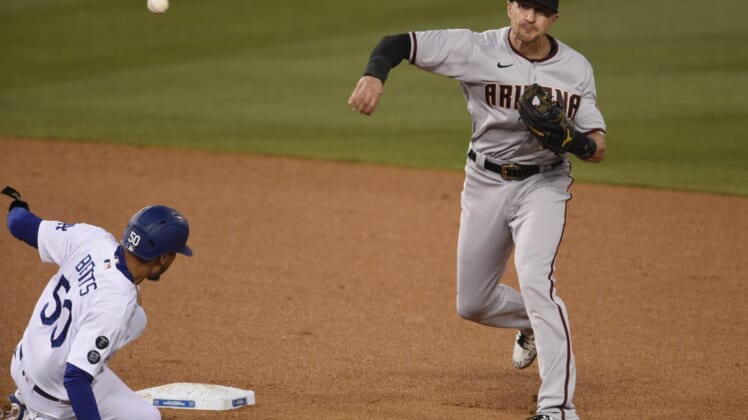 Left-hander Julio Urias dominated for 6 2/3 innings and Gavin Lux hit a grand slam as the Los Angeles Dodgers ran away late for a 9-1 victory over the visiting Arizona Diamondbacks on Tuesday.

Mookie Betts and Chris Taylor added home runs while Albert Pujols recorded an RBI for the second consecutive game as the Dodgers improved to 6-1 on their nine-game homestand. They came home following a 2-8 road trip.

Nick Ahmed had an RBI double for the Diamondbacks. Right-hander Corbin Martin gave up three runs on four hits over five innings in his Arizona debut. Martin was called up from Triple-A Reno on Tuesday when right-hander Luke Weaver (shoulder) was placed on the 10-day injured list.

Urias (6-1) gave up one run on three hits with no walks and eight strikeouts. He has allowed just five hits and two runs in a combined 13 2/3 innings over his past two starts.

The Dodgers had a player make his team debut for the second consecutive day as Yoshi Tsutsugo played left field and had two walks in four plate appearances. He was acquired in a trade with the Tampa Bay Rays on Saturday.

Pujols played in his second game with the Dodgers. He drove in the eventual game-winning run Tuesday against Arizona.

The Dodgers got off to a fast start when Betts led off with a home run to left-center field, his fifth long ball of the season. Martin (0-1), whose only previous major league experience was with the Houston Astros in 2019, gave up the homer on his second pitch.

The Diamondbacks got even in the second inning on Ahmed’s RBI double to center, with Martin settling down to hold the Dodgers in check into the fifth. In his third turn through the Dodgers’ lineup, though, Taylor tagged him with a two-run shot to right-center, his fifth homer of the season.

With Tsutsugo in left, Pujols at first and Max Muncy moved over to second, Taylor played third base for the first time since 2019.

The Dodgers broke the game open in the seventh after loading the bases with no outs. Pujols was grazed on his left elbow by a pitch to make it 4-1 before Lux hit a two-out grand slam to right field, his second homer of the season.

Los Angeles’ Will Smith added an RBI single in the eighth.