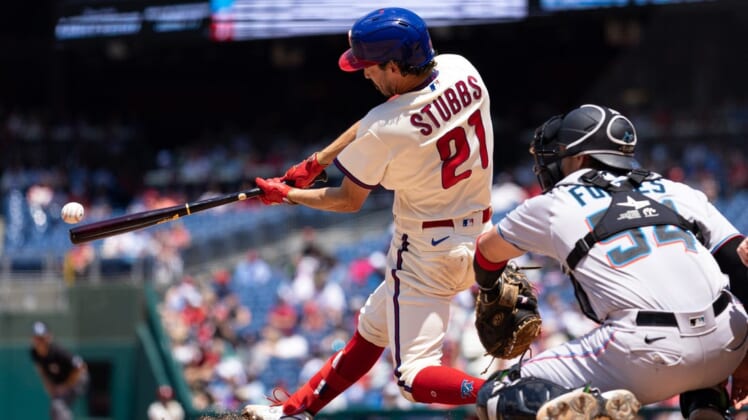 Garrett Stubbs hit a three-run walk-off homer with two strikes and two out in the ninth inning, leading the host Philadelphia Phillies to a dramatic 3-1 win over the Miami Marlins on Wednesday afternoon.

Philadelphia had gone 0-for-10 with runners in scoring position before Stubbs clubbed a 2-2 slider from left-handed closer Tanner Scott (2-2).

The Phillies have won 11 of their past 13 games.

With one out in the ninth, the Phillies got a single from Alec Bohm and pinch-hitter J.T. Realmuto’s seven-pitch walk. After pinch-hitter Yairo Munoz struck out, Stubbs delivered by pulling his 385-foot blast to right.

Connor Brogdon (2-0) struck out two in the ninth for Philadelphia.

Miami got strong performances from shortstop Miguel Rojas, who went 2-for-3 with his fifth homer of the season, a single and provided stellar defense; and catcher Nick Fortes, who doubled and threw out two runners trying to steal.

Marlins starter Daniel Castano pitched the longest game of his major league career (6 2/3 scoreless innings) but had to settle for a no-decision. Pitching his first major league game since May 18, Castano, 27, allowed five hits and two walks. He also produced nine groundouts.

Philadelphia’s Kyle Gibson also got a no-decision and struck out six. He pitched a season-high eight-plus innings, allowing seven hits, no walks and one run. He worked out of trouble in the second inning as Miami had two singles and a double but didn’t score. Jesus Sanchez’s single was wiped out by a double play. Rojas then singled and held at third on Fortes’ double. Both runners were stranded on a groundout by Bryan De La Cruz.

Miami took a 1-0 lead in the fifth on Rojas’ homer down the left-field line. The ball barely stayed fair, traveling 346 feet. Rojas hit an 83-mph changeup that was low in the zone.

Philadelphia threatened in the sixth on Rhys Hoskins’ leadoff triple that banged off the center-field wall at 409 feet. But Castano induced three straight groundouts — by Bryce Harper, Nick Castellanos and Didi Gregorius — keeping Hoskins at third.

With two on and two out in the seventh, Philadelphia’s Kyle Schwarber struck out looking on a high strike thrown by reliever Tommy Nance.