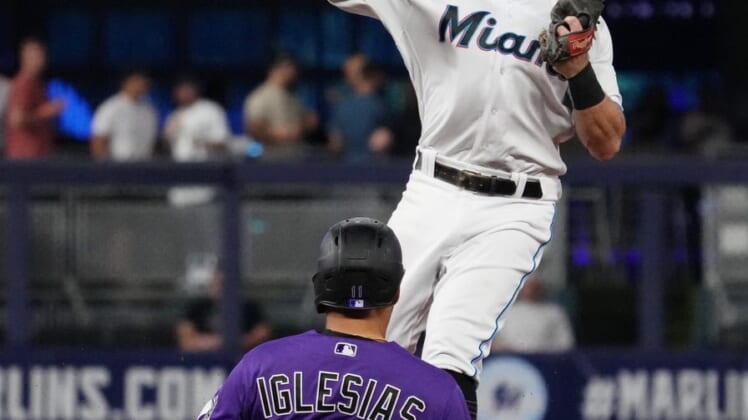 Avisail Garcia belted a three-run homer and Garrett Cooper atoned for an error with the go-ahead RBI double in the eighth, leading the host Miami Marlins past the Colorado Rockies, 9-8, on Tuesday night.

Ryan McMahon led Colorado with a 438-foot solo homer, an RBI double off the center-field wall and an RBI single.

Marlins starter Daniel Castano, who started the game with a 0.00 ERA through 10 2/3 innings, escaped with a no-decision. He allowed four runs in 3 1/3 innings.

Rockies starter Ryan Feltner also had a no-decision. He allowed six hits and five runs, four of which were earned.

Colorado opened the scoring in the second. C.J. Cron singled, and Brendan Rodgers and McMahon drew walks. Jose Iglesias then picked up an RBI with an infield single.

The Rockies stretched their lead to 3-0 in the third on a rally that started with Connor Joe’s leadoff single. With one out, Charlie Blackmon bunted away from the shift for a base hit before Rodgers lined a two-run double to right-center just one out later.

McMahon’s homer on a 0-2 cutter gave Colorado a 4-0 lead in the fourth.

However, the Marlins took a 5-4 lead the bottom of the frame on back-to-back homers from Garcia and Sanchez and Jon Berti’s RBI single. Garcia’s homer was preceded by a controversial catcher’s interference call that wiped out a double-play grounder by Aguilar.

Colorado tied things at 5-5 in the fifth on McMahon’s RBI double.

Miami responded once again, taking an 8-5 lead thanks to an RBI single from Sanchez and a two-run base hit from Miguel Rojas.

Colorado posted three runs in the sixth to even the score before Cooper doubled home Nick Fortes in the eighth for what would be the game-winning run.