Jacksonville Jaguars quarterback Gardner Minshew isn’t giving up on his hopes of being atop the team’s depth chart, despite the presence of No. 1 overall draft pick Trevor Lawrence.

It’s been widely and wisely assumed that Lawrence will be the Jags’ Week 1 starter, but in a recent interview with retired NFL veteran Chris Long, Minshew didn’t sound like a man ready to concede defeat in Jacksonville’s QB competition, per Dov Kleiman:

Minshew endeared himself to Jacksonville fans as a 2019 sixth-round pick who wound up taking over for an injured Nick Foles and playing quite well as a rookie under the circumstances.

Although he shined in a Week 1 performance for the ages last season against the Indianapolis Colts, Minshew couldn’t ultimately hang on to the starting job, in part due to injury. Plus, the Jags were set up to lose in 2020, which set the stage to land someone like Lawrence in the first place. 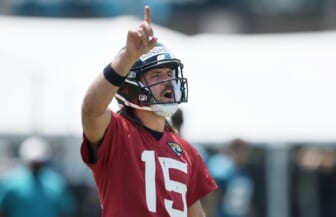 As well as Minshew played, generally speaking, in his first NFL season, his Next Gen Stats suggest he left a lot of plays on the field.

Among qualifying quarterbacks from 2019, Minshew had the second-worst deficit (-5.2%) between expected completion percentage and actual completion rate. This past year, he made a big jump in that category, with a +2.9% differential, which ranked eighth, ahead of QBs like Derek Carr, Dak Prescott, Kyler Murray and Ryan Tannehill.

With a decent-enough arm, marked improvement in accuracy as he’s adjusted to the NFL game, the knack for making off-schedule plays, and the charisma to boost the morale of an entire football team and city, Minshew has some intriguing potential as a trade target.

Minshew may not have a realistic chance to be traded just before training camp and win a starting job in a matter of weeks. However, with a change of scenery away from the Jaguars, he could at least position himself for some starts throughout the 2021 campaign, or leverage a spot for a competition in 2022.

Destinations for Minshew that spring to mind and fit that criteria include the Pittsburgh Steelers, Green Bay Packers, New Orleans Saints and Carolina Panthers.