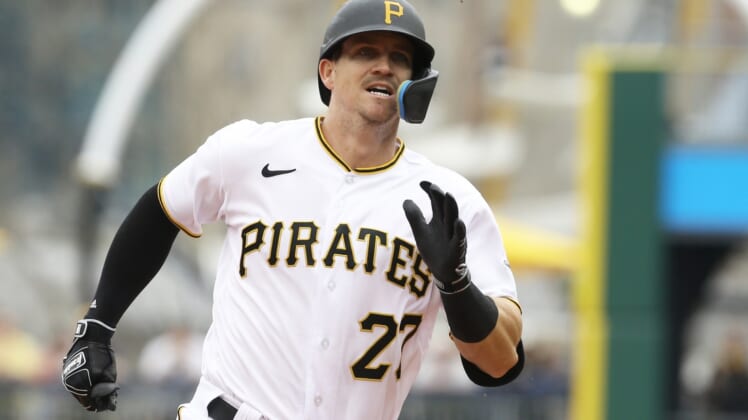 Ben Gamel’s go-ahead three-run home run in the first inning Wednesday stood up as the Pittsburgh Pirates downed the visiting Chicago Cubs 6-2 for a split of their two-game series.

Kevin Newman added a two-run triple, and Ke’Bryan Hayes was 4 for 4 with an RBI single and two runs scored for the Pirates, who scored all of their runs with two outs.

Pittsburgh starter Zach Thompson gave up two runs and five hits in four-plus innings, with three strikeouts and one walk before he left after getting hit in the back of the right (throwing) shoulder with a comebacker by Nico Hoerner two batters into the fifth.

The Pirates said Thompson has a contusion and is day to day.

Willson Contreras hit a solo homer and Seiya Suzuki added an RBI single for the Cubs.

Contreras gave the Cubs a 1-0 lead with a two-out blast to center, his first homer.

Pittsburgh answered in the bottom of the first, also with two outs. Hayes reached on an infield single and Yoshi Tsutsugo walked. Gamel followed with his first homer, to right, for a 3-1 lead.

Once more with two outs, the Pirates added two in the third. Hayes doubled to left with one out. After Tsutsugo struck out, Gamel walked. Newman’s standup triple off the wall in the corner in right drove in both runners for a 5-1 lead.

Thompson set down eight in a row after Contreras’ homer until the fourth, when Contreras doubled to right and Ian Happ walked. Suzuki’s single to center drove in Contreras to cut it to 5-2.

In the bottom of the fourth, Hoy Park walked with one out, went to second on Daniel Vogelbach’s single to center and to third on Bryan Reynolds’ flyout. Hayes followed with an RBI single to right to increase Pittsburgh’s lead to 6-2.