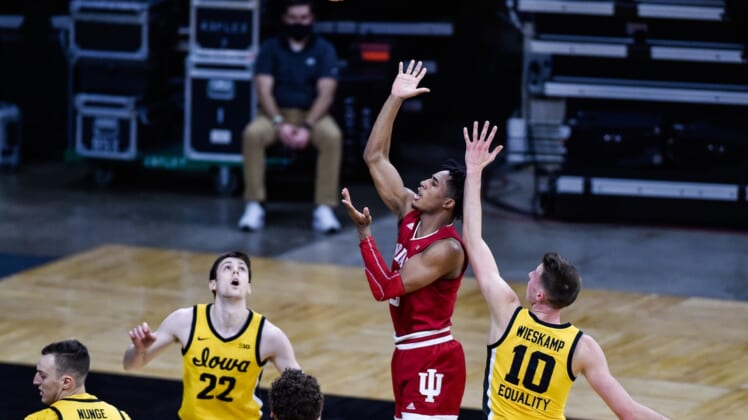 Trayce Jackson-Davis scored 23 points and Indiana put forth a smothering second-half defensive effort in an 81-69 upset at No. 4 Iowa on Thursday night.

Down 53-44 midway through the second half, Indiana rallied to tie the score at 53 with a 9-0 run, then took control of the game down the stretch, limiting the Hawkeyes to just three field goals over the game’s last 12 minutes. Iowa, the Big Ten’s top scoring offense at 92.2 points per game, shot just 38.1 percent from the field and 21.7 percent from the 3-point line.

Wieskamp and Garza combined to score 30 points in the first half, helping Iowa jump to a 37-31 halftime lead.

Garza established himself inside early, scoring seven of Iowa’s first 10 points. Wieskamp then heated up from outside, sinking his first three 3-point attempts, including a 3-pointer with 11:25 left in the first half to give Iowa an early 25-18 lead.

The Hawkeyes led by as many as nine points in the first half, going up 37-28 on a pair of Garza free throws. But the Hoosiers closed the half with a modest 3-0 run, cutting Iowa’s lead to 37-31 on a Durham free throw.

Indiana played without starting freshman swingman Trey Galloway, who was out with back soreness. Iowa guard C.J. Fredrick sat out the second half with lower leg soreness.