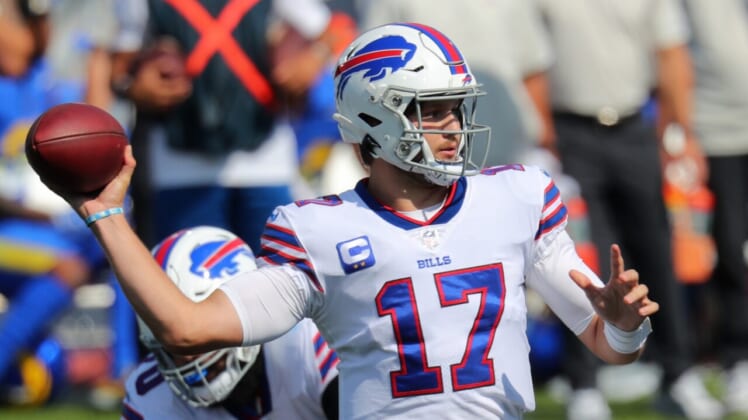 LAS VEGAS, NEV. – Today’s Raiders vs. Bills game looks to be a shootout with both team’s defenses struggling in various aspects of the game. Can Paul Guenther’s defense overcome injuries and subpar performances through three weeks to stop Jaren Allen and the Bills? Can Derek Carr repeat his and the Raiders offense performance against the Saints and limit Allen’s chances to run the high-powered Bills offense? We’ll update you live throughout the game here as our Editor Scott Gulbransen keeps you up-to-date with the latest on the game. REFRESH OFTEN FOR UPDATES…

4:27 PM: Sorry…due to technical issue we couldn’t update during the second half. You didn’t miss anything! Raiders trail 30-16 with 1:55 remaining…

3:02 PM: Second half underway with the Raiders on offense.

2:52 PM: At halftime, the Raiders trail the Buffalo Bills 17-13. Derek Carr again led a big drive to end the half finding Jason Witten from 3-yards out for the Raiders first touchdown on the day.

1:48 PM: After a questionable run call to Ingold on 3rd and short, Daniel Carlson bots 54-yarder…Bills 7 Raiders 3 with 5:02 left in 1st quarter here at Allegiant Stadium.

1:44 PM: Carr gets big first down with long gain to Zay Jones.

1:41 PM: The Raiders are looking for their first opening-drive points of 2020, per Josh Dubow of AP.

1:36 PM: Bills up 7-0 with 10:37 remaining in the first. Raiders defense put up little fight and created no pressure on Allen. If they continue to play that way, will be hard to beat this Buffalo squad.

1:26 PM: Kickoff…touchback. We’ll get a quick look at Allen and that Raiders defense.

1:02 PM: Zay Jones and Nelson Agholor starting at the two WR spots, Sam Young at RT for the Raiders. Nevin Lawson gets start for Damon Arnette.

12:33 PM: Drop your score predictions below in the comments. Of the entire Silver and Black Today staff, I am the only one who picked them to win. I have the Raiders eeking one out 31-30. Check out the prediction post.

11:35 AM: In other AFC West action…the LA Chargers Justin Herbert so far laying the wood to the Tom Brady-led Patriots who the Raiders face in two weeks. 24-7 late in first half.

11:00 AM: Per my Raider Nation Radio teammate, and RJ beat reporter, Vinny Bonsignore, both Nick Kwiatkoski and Sam Young will play today for the Raiders:

10:54 AM: Despite not being able to come inside Allegiant Stadium, fans are in force outside ready to be a part of game day for Raiders vs. Bills. Check this out Raider Nation:

10:14 AM: Inside Allegiant Stadium now as game day staff getting the field ready for Raiders vs. Bills at 1:25 pm PDT.

9:32 AM: Of note: Six (6) NFL teams will be hosting fans inside their stadiums: Tampa Bay Buccaneers, Miami Dolphins, Houston Texans, Dallas Cowboys, Cincinnati Bengals, and Carolina Panthers. Per Raiders owner Mark Davis, despite Nevada’s loosening of restrictions on social gatherings this week, Allegiant Stadium will not host fans this season. Davis reiterated his “all fans, or no fans” POV this week.

9:14 AM: Check out our Silver and Black Today Raiders vs. Bills staff predictions for the outcome of today’s game.

9:11 AM: In case you missed it, the Raiders activated RB Theo Riddick and WR Keelan Doss from the practice squad for today’s game against Buffalo.