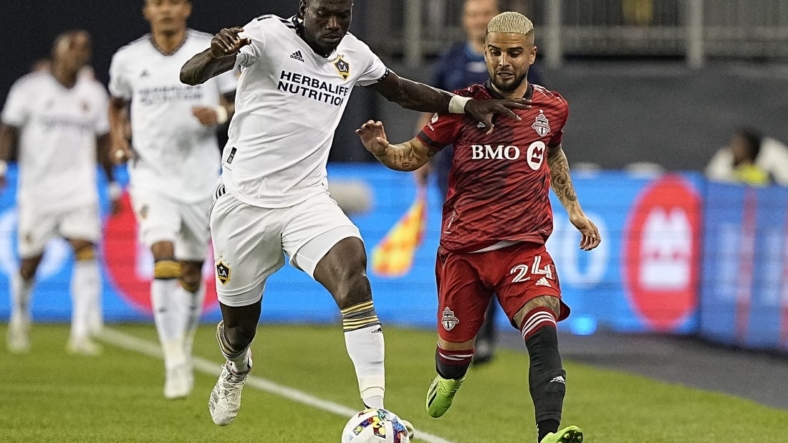 Riqui Puig’s 89th-minute wonder goal salvaged a point for the Los Angeles Galaxy in a 2-2 road draw with Toronto FC on Wednesday.

The Galaxy (11-11-5, 38 points) led 1-0 through 61 minutes before Jesus Jimenez and Federico Bernardeschi put Toronto (9-13-7, 34 points) ahead. Puig then decided matters just before stoppage time, as the midfielder launched a tremendous shot from just outside the box that sailed into the upper corner of Toronto’s net.

Acquired in a transfer from Barcelona in early August, Puig scored his first MLS goal in his third game and second start with Los Angeles.

Douglas Costa also scored the opening goal for the Galaxy, who are unbeaten (2-0-2) in their last four games.

Toronto missed a chance at a stirring comeback win, and a victory would’ve brought the Reds to the edge of the Eastern Conference playoff line. Toronto is now 4-1-3 in eight games since Bernardeschi, Lorenzo Insigne and several others joined the team in a roster overhaul during the summer transfer window.

Bernardeschi was again a factor Wednesday, scoring his sixth goal in eight games with Toronto after converting a penalty kick in the 81st minute. Galaxy defender Raheem Edwards committed the critical foul by bringing Bernardeschi down in the box.

The Galaxy scored their opening goal on a free kick. In the 24th minute, Costa scored his third goal of the season by delivering a well-placed strike past a diving Alex Bono.

Jimenez and Ifunanyachi Achara entered the game as substitutes in the 61st minute, and within seconds sparked Toronto FC’s offense. Just a minute after entering the game, Achara sent a quick pass to Jimenez in the box that resulted in the equalizer.

It was Jimenez’s ninth goal of the season, but just the second in 19 games for the inconsistent striker.