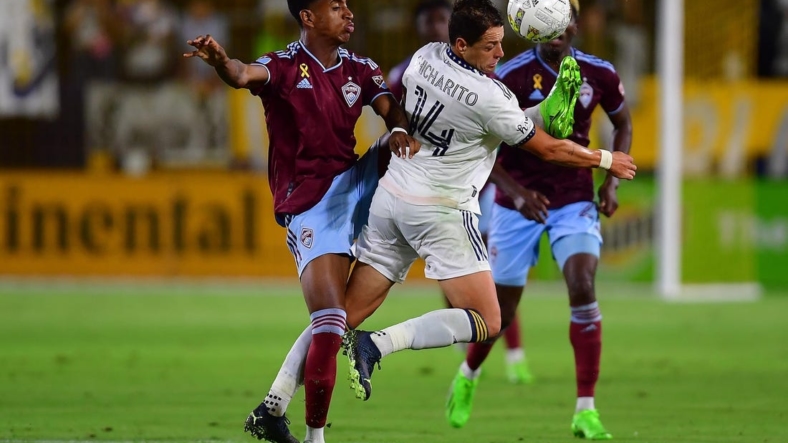 Gaston Brugman scored his first two MLS goals and the Los Angeles Galaxy dominated play while posting a 4-1 victory over the Colorado Rapids on Saturday night at Carson, Calif.

Riqui Puig had three assists for Los Angeles (12-12-7, 43 points), which moved into the seventh position in the Western Conference playoff race. The Galaxy have the same number of points as Real Salt Lake but own the tiebreaker edge.

Colorado (10-13-9, 39 points) saw its playoff hopes take a big hit with the loss. The Rapids are tied with the Seattle Sounders for the 10th-most points in the West.

Sam Nicholson scored a late goal for Colorado, which drops to 1-11-4 on the road.

The Galaxy were winless in their previous eight MLS matches (0-6-2) with the Rapids.

LA’s Jonathan Bond made five saves, while William Yarbrough had eight for Colorado.

Los Angeles continued its mastery in Saturday’s game even though Douglas Costa received a red card in the 62nd minute for violent conduct. That left the Galaxy a man short for the remainder of the contest.

The Galaxy took control with three goals over a 10-minute span of the first half.

The spree began when Samuel Grandsir sent a pass ahead to Brugman, who delivered a right-footed shot into the net in the 22nd minute.

Six minutes later, Edwards made it 2-0 when he kicked a left-footed shot into the net. It was his first goal of the season.

Chicharito tallied in the 31st minute. Julian Araujo fed him the ball and Chicharito knocked it in with his right heel for his 15th goal of the season.

Brugman scored his second goal in the 52nd minute when he sent a right-footed shot from outside the box into the right corner of the net.

Los Angeles had a 20-15 edge in shots and placed 12 on target to Colorado’s six.