Galaxy, Nashville SC meet with both on upswing 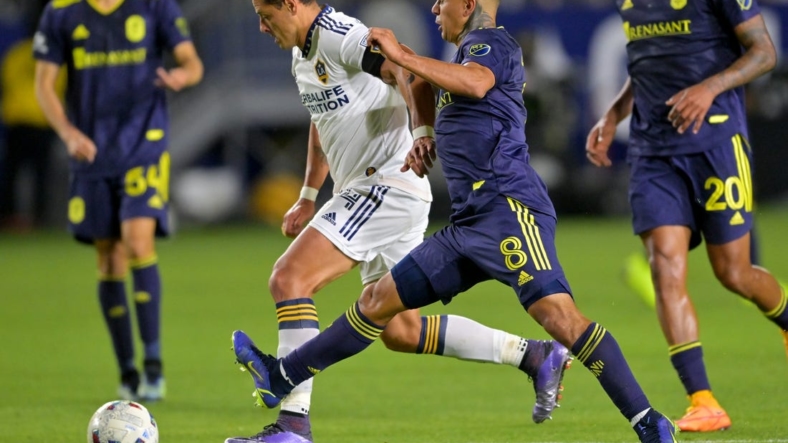 The Los Angeles Galaxy are unbeaten in their last five, but they still need to make up ground if they’re going to qualify for the playoffs, beginning with Saturday afternoon’s trip to streaking Nashville SC.

The eighth-place Galaxy (11-11-6, 39 points) have two wins and three draws in their unbeaten run, and enter the weekend three points back of Real Salt Lake and the Portland Timbers for a Western Conference playoff spot.

Javier “Chicharito” Hernandez has 14 goals and Dejan Joveljic has 10. But finishing matches has become a problem, with the Galaxy giving back the lead in those last three draws.

“I think there are some positives in this,” coach Greg Vanney insisted. “We’ve set a goal as we start off games to come back in the locker room (at halftime) 0-0 or up, and we’ve come back up in most of these games. The second half has been about controlling and seeing games out. When you get tired, it’s about not making mistakes and not exposing yourself as fatigue sets in.”

It was Joveljic who scored late in one of the Galaxy’s rare shutout victories, a 1-0 home win over Nashville SC back in April.

Things have changed on both sides since. The Galaxy have added Riqui Puig and Gaston Brugman in midfield, plus Martin Caceres in defense.

Meanwhile, Nashville (12-9-9, 45 points) opened its new home stadium a week following that April loss. And after an early adjustment period, the club has embraced a home-heavy second half of the schedule, winning four in a row while outscoring opponents 14-1 in the process.

“I think we’re going to see a very different game come the weekend,” said Nashville coach Gary Smith, referencing his team’s defeat at the Galaxy. “We’re in a better place. I think they are, they’ve added a couple of bodies that look very talented and have given them a different dimension and a different look in certain aspects.”