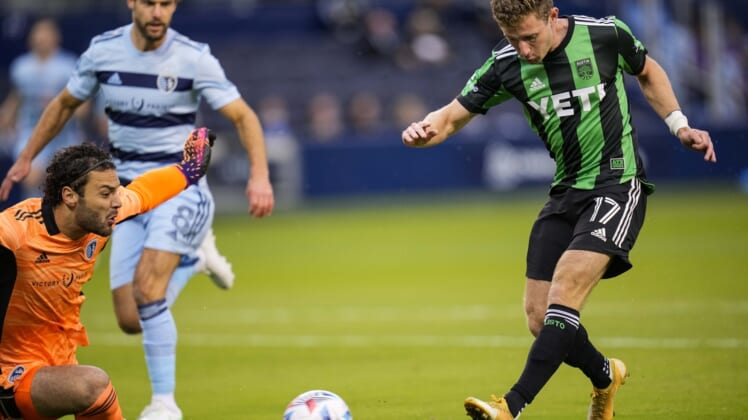 Khiry Shelton touched a cross from the left over to Kinda in the center of the box, and Kinda headed a bouncer out of reach of Austin goalkeeper Brad Stuver.

Ilie Sanchez also scored for Sporting (2-1-1, 7 points) and Jon Gallagher found the back of the net for Austin.

It was both the first appearance in Kansas City for expansion side Austin FC (2-2-0, 6 points) and a homecoming for defender Matt Besler, head coach Josh Wolff and assistant coach Davy Arnaud. Besler spent the last 12 seasons patrolling the backfield for Sporting KC. Wolff and Arnaud played for the Kansas City Wizards.

Sporting looked like it would leave frustrated until scoring twice in the final 10 minutes.

Sporting had a run at goal in the 58th minute when Gianluca Busio was displaced in the box but the ball fell to Daniel Salloi, whose attempt sailed wide right.

Sporting gained a man advantage in the 67th minute when Alex Ring was shown his second yellow card, eliminating him from the contest. But they could not dent the back of the net.

Salloi’s attempt from close range in the 74th minute was deflected by Stuver off the crossbar. Johnny Russell’s attempt two minutes later was high. In the 78th minute, Andreu Fontas’ header from inside the 6-yard box settled on top of the net.

Ilie finally capitalized in the 83rd minute, leveling the match. Johnny Russell’s corner kick found Ilie in front of Stuver for the equalizer.

After Sporting saw a couple of early attempts go awry, Austin got on the board first in the seventh minute. Gallagher collected a pass from Jared Stroud on the right wing, brought it under control and slipped it past SKC goalkeeper John Pulskamp.

Both clubs had plenty of additional scoring opportunities in the remainder of the first half. Austin FC finished the first half with seven shots (three on goal), while Sporting KC had 12 shots, with four on goal. But neither side could capitalize.

Sporting finished with 25 shots (eight on goal) compared to Austin’s 11 (six on goal).