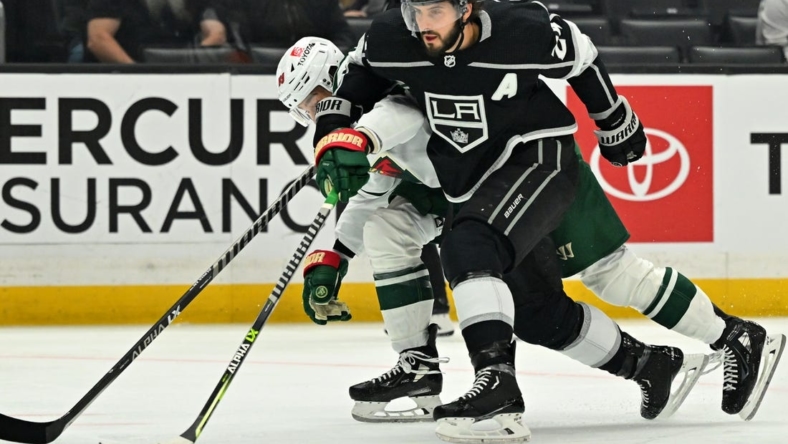 Jonathan Quick made 21 saves for the Los Angeles Kings in a 1-0 victory against the visiting Minnesota Wild on Tuesday night.

Gabriel Vilardi scored with 6:03 left in regulation for Los Angeles.

Marc-Andre Fleury made 29 saves for the Wild.

Wild left wing Jordan Greenway, who was playing his first game since sustaining a shoulder injury three minutes into his season opener against the Vancouver Canucks on Oct. 20, turned the puck over in the Los Angeles zone along the wall, leading to Vilardi’s goal.

Anze Kopitar quickly slid a centering pass to Vilardi, who scored his 10th goal of the season on a one-timer to match his NHL career high.

The Kings did not record a shot on goal on their second and third power plays and then went on their fourth when Minnesota left wing Kirill Kaprizov was ejected at 14:48 of the second period for cross-checking Drew Doughty in the face.

Kaprizov, the leading goal and point scorer for the Wild this season and the past two seasons, also drew a five-minute major penalty, but the Kings were unable to convert on the lengthy man-advantage as Fleury made three saves and Minnesota blocked six shots.

The Wild blocked 22 shots in all.

The Kings outshot the Wild 10-3 in the scoreless first period. Minnesota went 14:39 between shots during the period.

Quick made a save with his outstretched blocker to turn away a shot by Kaprizov off a turnover at 5:57 of the second period, keeping the game scoreless.

The Kings briefly appeared to take a 1-0 lead at 8:30 of the second period, but it was quickly ruled Phillip Danault used a high stick to deflect the shot into the net.