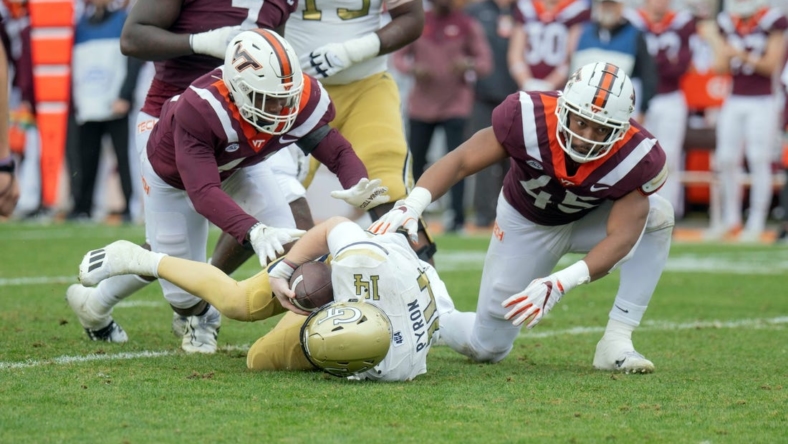 In his second career start, Zach Pyron threw a touchdown pass and ran for another score in the final 10 minutes as Georgia Tech rallied for a 28-27 Atlantic Coast Conference win over Virginia Tech Saturday in Blacksburg, Va.

The Yellow Jackets (4-5, 3-3 Atlantic Coast Conference) were down by 11 points early in the fourth quarter but with Virginia Tech (2-7, 1-5) threatening to add to its lead, Georgia Tech forced a turnover to trigger the comeback.

With 9:02 left, Pyron threw a 56-yard touchdown pass to Nate McCollum. Then with 3:30 to go, Pyron scrambled up the middle for a 9-yard touchdown run.

With starting quarterback Jeff Sims out for the second straight game with a sprained foot, true freshman Pyron took advantage of his opportunity as Georgia Tech snapped its two-game losing streak.

It was the sixth straight loss for Virginia Tech, its longest skid since 1987, when legendary coach Frank Beamer was in his rookie season.

The Hokies got a 90-yard punt return touchdown from Tucker Holloway with 50 seconds left in the first half.

Then in the third quarter, linebacker Keli Lawson scored when he batted a Pyron pass into the air, gathered it in and ran seven yards to the end zone to put Virginia Tech up 27-16.

But early in the fourth quarter, Georgia Tech’s D’Quan Douse jarred the ball from the grasp of Keshawn King, and Makius Scott recovered at the Yellow Jackets’ 10. Five plays later, Pyron threw his touchdown pass to McCollum.

On the ensuing possession, Clayton Powell-Lee halted a Virginia Tech drive with an interception, which gave Georgia Tech possession at its own 26. Pyron then directed a 74-yard drive which he capped with his touchdown run.

On Virginia Tech’s next possession, Douse helped wrap up the win with a sack. He was credited with 2 1/2 sacks, while teammate Charlie Thomas finished with 16 tackles. Powell-Lee wrapped it up with a fumble recovery with 48 seconds left.

Gavin Stewart made three field goals for Georgia Tech and now is 12-for-12 on the season.

It was the fourth straight win at Lane Stadium for Georgia Tech, which forced four turnovers and now has 22 takeaways this season. The Yellow Jackets entered the game No. 3 in the FBS in turnover margin at plus-13.

Dontae Smith put Georgia Tech up 7-0 in the first quarter with a tackle-breaking burst off right tackle, running 29 yards for a touchdown.

Pyron finished with 19 completions in 32 attempts for 253 yards and added 66 yards on 17 rushes. McCollum had seven catches for 103 yards.

Virginia Tech quarterback Grant Wells completed 14 of 25 passes for 164 yards. But his interception and two fumbles were costly.

In his first action as a punt returner, Holloway set the Hokies’ record for the most punt return yards in a single game, finishing with 188 yards on seven punt returns. Antonio Freeman previously set the record (164) in 1994.