Tyson Fury to fight unnamed opponent on Dec. 5 in London

Tyson Fury confirmed on Saturday that his next fight will take place in London on Dec. 5 against an as yet unnamed opponent... 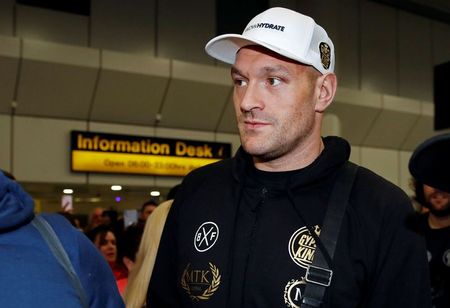 (Reuters) – Tyson Fury confirmed on Saturday that his next fight will take place in London on Dec. 5 against an as yet unnamed opponent.

The 32-year-old Briton’s last bout was against Deontay Wilder in February, where he won the WBC world heavyweight title in Las Vegas with a seventh-round stoppage.

“I’d just like to announce that I’m definitely fighting on Dec. 5 in London in the UK,” Fury said in a video posted on Twitter. “Opponent to be announced very, very soon.

“I am just working on some opponents and will let you all know who it’s going to be shortly.”

Fury said earlier this month that he had moved on from facing Wilder in a rematch, moving a step closer to a possible meeting with IBF, WBA, WBO and IBO champion Anthony Joshua for the undisputed world heavyweight title.

Joshua is due to defend his IBF, WBA and WBO titles against Bulgarian Kubrat Pulev at London O2 Arena on Dec. 12.

Promoter Eddie Hearn said in June that Fury and Joshua had agreed financial terms for a two-fight deal.

(Reporting by Simon Jennings in Bengaluru; Editing by Christian Radnedge)