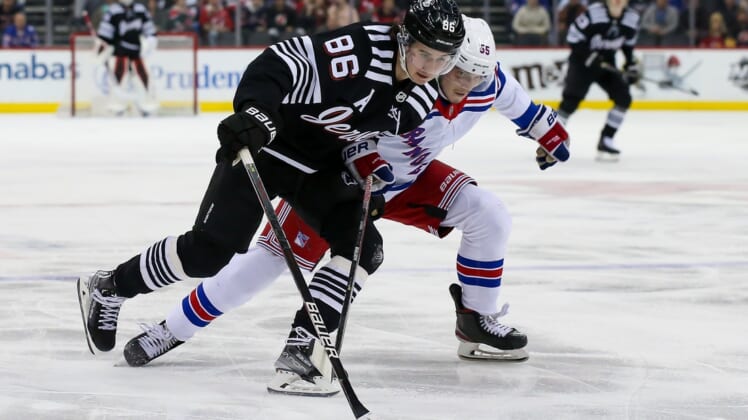 The New Jersey Devils scored five times in the second period and rallied for a 7-4 victory over the New York Rangers on Tuesday night in Newark, N.J.

Dawson Mercer scored the tiebreaking goal for the Devils with 7:20 remaining in the second period. Jack Hughes scored twice for New Jersey.

Jesper Bratt and Nico Hischier collected two assists apiece for the Devils, who were outscored 36-14 in their previous eight meetings with the Rangers.

Mika Zibanejad and Adam Fox scored in the opening 20 minutes for the Rangers, who were coming off an impressive back-to-back road sweep of the Tampa Bay Lightning and Carolina Hurricanes. Ryan Strome and Chris Kreider also scored for the Rangers.

Zibanejad opened the scoring 7:10 in by putting a wrist shot from the left side into the vacated side of the net. Fox scored nearly seven minutes later with a wrister from the middle of the right circle; but, after that, the Devils capitalized on a porous New York defense.

Graves blasted a long wrister from the left faceoff circle to open the scoring for New Jersey, moments after Fox committed a defensive zone turnover.

Subban tied it with 11 1/2 minutes left when his slap shot through traffic sailed by Shesterkin. That came after New York defenseman Jacob Trouba had coughed up the puck behind the net.

The Devils went ahead when Mercer eluded Zibanejad and slipped the rebound of Graves’ shot into the vacated left side. New Jersey scored again 33 seconds later when Tatar got a long pass from Bratt through the slot and buried the puck into the left side of the net.

After Bratt’s goal was overturned due to an offsides call with 6:05 remaining in the second, Sharangovich flicked a wrist shot from the left side over Shesterkin with less than two minutes to go to make it 5-2.

Strome made it 5-3 by redirecting a shot by Artemi Panarin 3:46 into the third, but Hughes finished it off moments after Kreider fanned on a short-handed 2-on-1 rush.