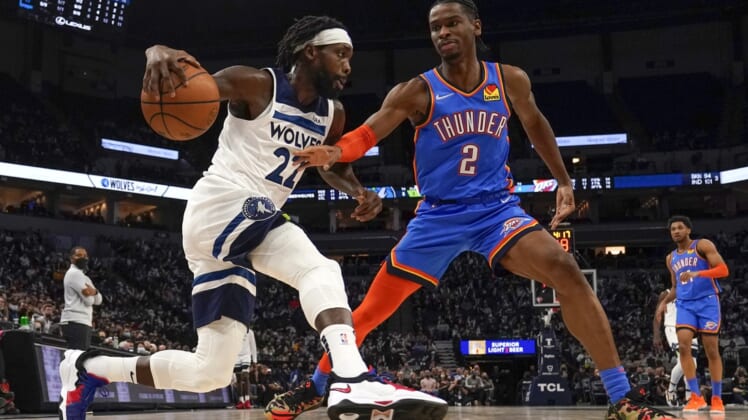 Even before the last month, as COVID-19 wreaked havoc on rosters throughout the NBA, the Minnesota Timberwolves have struggled to keep their roster intact.

But now, with franchise cornerstones Karl-Anthony Towns and D’Angelo Russell back, the Timberwolves are hoping to make a run that could push them to their first postseason berth since 2018 and just their second since 2004.

“We got everybody back now,” Anthony Edwards said. “So all the excuses are out the window. I think we’re going to go on a run right here, get these next five or six. When we got everybody, ain’t no excuses. You got us at full strength, and I think we’re a hard team to beat.”

Heading into Friday’s road game at the Oklahoma City Thunder, Minnesota has won back-to-back games, including Wednesday’s 98-90 home win over the Thunder.

In that win, both Towns and Russell showed some rust after missing six and five games, respectively, due to the league’s health and safety protocol.

It was just the 11th time in 38 games the Timberwolves have had Chris Finch’s preferred starting lineup intact.

With both Russell and Towns available, Minnesota is 16-10. The Timberwolves are 9-2 when Russell, Towns, Edwards, Jarred Vanderbilt and Patrick Beverly start and just 9-18 when one or more of those starters is missing.

With players shuffling in and out of the rotation recently, Minnesota’s reserves have had to pick up the slack. That experience helped in Wednesday’s win and figures to help down the road.

Edwards has said repeatedly that the Timberwolves were a playoff team.

Now’s the time for them to prove that.

Wednesday’s game against the Thunder was the first in a four-game stretch against teams at least 10 games under .500.

Oklahoma City comes into Friday’s game having dropped back-to-back games and four of their last five.

While the Thunder have struggled as they continue with their rebuild, rookie Josh Giddey has been a bright spot.

He earned Western Conference Rookie of the Month honors in November and December and is off to a hot start so far in January, becoming the youngest player in NBA history to record a triple-double (Jan. 2 against Dallas). He’s averaging 15.5 points, 14 rebounds and 10 assists in Oklahoma City’s two games since the beginning of the year. He’s also 5-of-9 from behind the 3-point line, his most from beyond the arc in a two-game stretch this season.

Giddey, who was shooting less than 25 percent on 3-pointers before the last two games, said improving his outside shooting remains a primary focus.

“Making them come up and respect that three is going to be big for me going forward,” Giddey said, “because it’s going to open up so many other things.”

Oklahoma City also got an influx of players back recently as Shai Gilgeous-Alexander, Darius Bazley, Tre Mann and Jeremiah Robinson-Earl all returned from protocol for Wednesday’s loss.