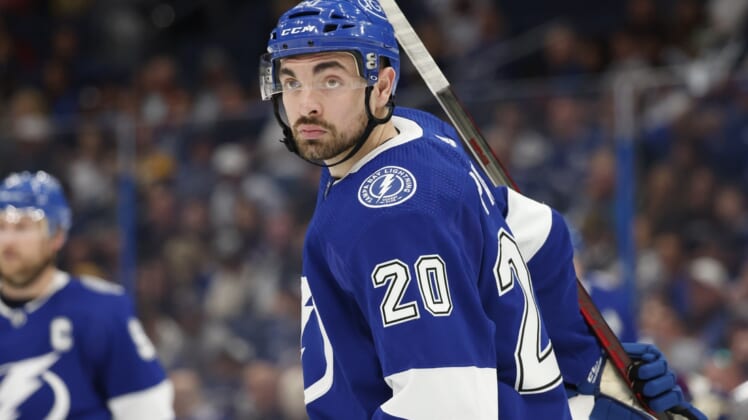 The suddenly skidding Tampa Bay Lightning look to get back on track and keep pace in the Atlantic Division when they host the Buffalo Sabres on Sunday.

“It’s frustrating when you lose a game in overtime when you feel you might have deserved another fate,” Lightning coach Jon Cooper said. “That’s the game. I would hope the guys would be frustrated now. Let’s channel the energy to Buffalo. You picked up a point. Let’s move on. That’s what we want to keep doing.”

It’s the first four-game slide for the reigning back-to-back Stanley Cup champions since Feb. 20-27, 2020, when they lost four straight in regulation.

Tampa Bay holds the first wild card spot in the Eastern Conference and resides one point behind the Bruins, who are third in the Atlantic Division.

Despite the loss, the Lightning are hopeful that their effort last time out can get them back on track. The tight contest was a change from their three previous losses, in which they allowed a total of 14 non-shootout goals.

“For us, we look ahead to the next game,” defenseman Victor Hedman said. “We’re not too worried about the standings or anything. It’s about the process and this was a step in the right direction.”

The Sabres (26-36-11, 63 points) are hoping to make the most of lessons learned after a 3-1 lead turned into a regulation defeat for the second straight game.

On Friday, the team was 38 seconds from heading to overtime against the Florida Panthers when Sam Bennett scored what proved to be the game-winning goal. One night earlier, Sebastian Aho broke a tie with 8:21 remaining in the third in a loss to the Carolina Hurricanes.

“But for us it’s about growth. Losing that way, there are some silver linings to it that we can look at and say, ‘Hey, this can’t happen again.’ Our guys have proven that they’ve learned through situations like that through the course of the year and this was just another one.”

It’s the first time the Sabres have dropped consecutive games in regulation since March 6-7. They’ve gone 8-4-3 since then, but have lost three of their past four games.

Jeff Skinner and Victor Olofsson continue to have the magic touch.

Skinner scored his 30th goal of the season on Friday to extend his point streak to five games (three goals, four assists).

Olofsson upped his season total to 18 goals after scoring in his third consecutive contest on Friday.