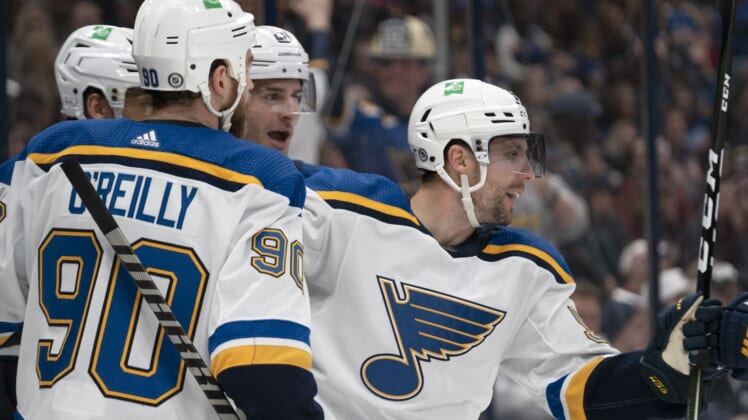 Coming off a frustrating road loss, the St. Louis Blues will look to rebound against the host Washington Capitals on Tuesday night.

The Blues fell to the Columbus Blue Jackets 5-4 on Saturday night. Victories have been elusive for St. Louis recently, with the team losing its last three games (0-1-1) and seven of nine (2-4-3).

One bright spot for the Blues as of late has been forward David Perron, who’s scored 21 goals and 19 assists this season and had a hat trick, the seventh of his career, against the Blue Jackets during Saturday’s defeat.

Blues head coach Craig Berube touted Perron’s offensive performance as something the rest of team could build upon.

Perron believes his team needs to shake off their recent slump and return to an offensive mindset.

“It’s just getting back to playing the right way. … That’s playoff hockey, you go up, you go to work, it helps everyone out on the changes,” Perron said. “It helps everyone out when they’re (the defense) getting more tired, when we’re in the O-zone.

“And it gives us momentum working, and it’s fun working down there versus working in your D-zone. I just don’t think we do that enough.”

While the Blues have struggled, the Capitals have been racking up points, beating four of their last five opponents — with three of those wins in overtime or shootout. Washington, after enjoying a four-game winning streak, lost 3-2 to the Dallas Stars on Sunday.

The Blues previously bested the Caps 5-1 when the two teams met in St. Louis on Jan. 7.

Washington will skate without some of its top players, who have been injured recently. T.J. Oshie is suffering from a lower-body injury, while center Nic Dowd (upper body) and defenseman Trevor Van Riemsdyk (upper body) are also hurt.

Forwards Joe Snively (wrist) and Carl Hagelin (eye) are on IR through April 15.

To make matters worse, Caps defenseman John Carlson may also be out after suffering a hit from Dallas’ Jamie Benn in the waning seconds of the third period Sunday, when Benn shoved Carlson into the boards.

Washington head coach Peter Laviolette called Benn’s hit on Carlson “dirty” and added that he hopes the NHL will investigate it.

“They have to,” Laviolette said. “That’s one of our best players.”

Since the Caps have a depleted roster, they’ll be relying more than ever on captain Alex Ovechkin, who scored a power-play goal against Dallas to reach the 40-goal mark for the 12th time in his NHL career, tying the legendary Wayne Gretzky.

Laviolette had nothing but praise for his team’s icon.

“He’s been consistent from start to finish with his game, a pretty incredible accomplishment,” Laviolette said. “It’s been a consistent thing that we’ve seen from training camp, right from the start of the season until now.”