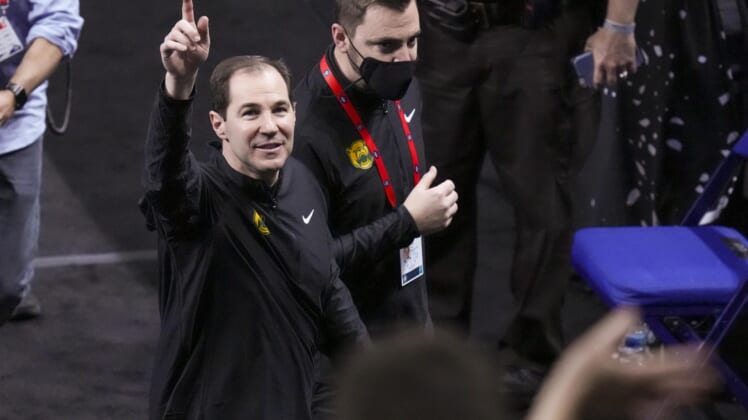 Apr 3, 2021; Indianapolis, Indiana, USA; Baylor Bears head coach Scott Drew (left) waves to the crowd as he walks off the court after the game against the Houston Cougars in the national semifinals of the Final Four of the 2021 NCAA Tournament at Lucas Oil Stadium. Mandatory Credit: Kyle Terada-USA TODAY Sports

Scott Drew has reached a place few people outside of his family would have predicted in the summer of 2003.

Drew took over the downtrodden Baylor program in the wake of one of the worst scandals in college sports history and 18 years later, he will be coaching in the national championship game.

The Bears (27-2) face fellow No. 1 seed Gonzaga (31-0) on Monday night in Indianapolis with a chance to spoil the Bulldogs’ undefeated season quest, and Drew says he isn’t the least bit surprised that his once-dormant program is about to play for the national crown.

“I definitely thought and believed 100 percent we could be in this position,” Drew said.

That might qualify as a case of positive thinking to the highest level due to the mess that Drew, then 32, inherited at Baylor.

The program was reeling after the shooting death of player Patrick Dennehy, and then the nation was aghast when teammate Carlton Dotson was arrested for the murder.

Then a bad situation disintegrated into a slimy and grimy affair when then-coach Dave Bliss was caught on audio tape encouraging players to paint Dennehy as a drug dealer in his attempt to keep investigators and NCAA officials from digging around the program and unearthing irregularities.

Bliss resigned as the fire storm got hotter, and Baylor was eventually hit with sanctions that crippled the program. The Bears went 21-53 in Drew’s first three seasons.

Yet Drew, who holds the school record with 369 victories, doesn’t present any magic formula for a turnaround of such epic proportions.

“Every day you’re grinding, and you really don’t look back,” Drew said. “You just keep pressing forward. And been so blessed to have unbelievable players that have bought into what we like to do with the program, tremendous assistant coaches that have sacrificed so much time, hard work, sweat to get us here.

“And then the Baylor faithful, they’ve supported us through the lean years and the rebuilding years. And you can’t get there without administration that believes in you and supports you.”

Few’s team has been the best in the land for the entire season, while Baylor was close behind for much of the campaign. The teams were slated to meet on Dec. 5 in Indianapolis, but the contest was scrapped when a Gonzaga player tested positive for COVID-19.

Now the two close friends are squaring off with both hoping to win their school’s first national championship.

Gonzaga reached the title game when Jalen Suggs banked in a miraculous 35-foot heave as time expired in overtime for a 93-90 win over UCLA. Baylor advanced by building a 25-point halftime lead in a 78-59 drubbing of Houston.