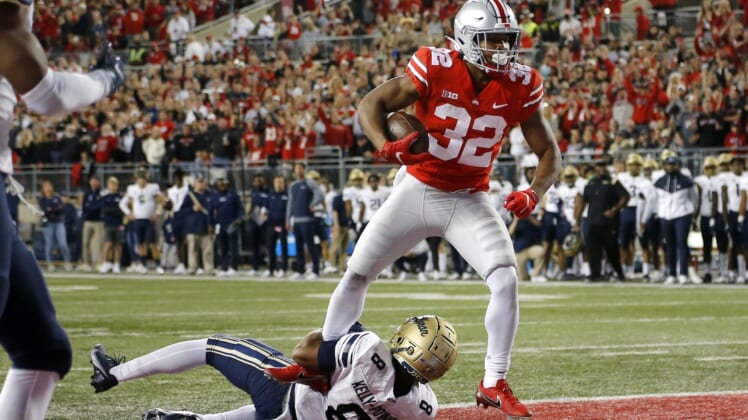 Ohio State spotted Akron an early lead before freshman quarterback Kyle McCord, in his first collegiate action, helped the No. 10 Buckeyes to a 59-7 rout of the Zips in Columbus on Saturday.

McCord was 13-of-18 for 319 yards with the two TDs and an interception before being replaced midway through the third quarter.

He got the nod after coach Ryan Day decided to rest C.J. Stroud, who struggled in his first three career starts this season with a sore shoulder.

McCord was the fourth true freshman to start at QB for Ohio State.

Along with running back Henderson (93 yards on eight carries), it was the first time Ohio State started two true freshmen in the backfield.

After incompletions on first two attempts, McCord completed 11 of his next 13 for 229 yards through halftime, including a 5-yard TD to Chris Olave and a 35-yard strike to Jaxon Smith-Njigba to make it 21-7.

Akron surprised the Buckeyes when, on their second possession of the game, the Zips went 55 yards on nine plays, capped by a DJ Irons pass of 4 yards to Konata Mumpfield to go ahead 7-0.

During the second quarter, Ohio State senior linebacker K’Vaughan Pope had a heated exchange with the coaches after being waved off the field while trying to go in for a defensive package. He was told to leave the sidelines and was escorted to the locker room by a staff member as he threw some of his equipment into the stands.

On Twitter shortly after that he posted, “good lucc [sic] to my teammates,” then “f– ohio state,” before deleting the latter.