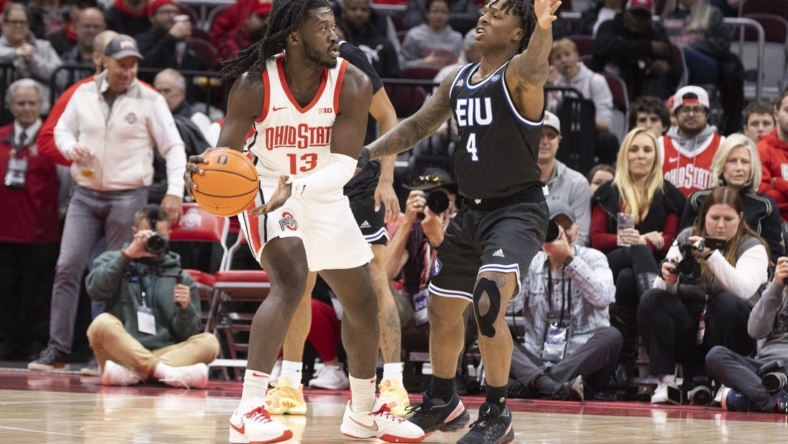 Freshman Brice Sensabaugh had a career-high 20 points off the bench and Zed Key recorded his third straight double-double when host Ohio State defeated Eastern Illinois 65-43 in Columbus on Tuesday.

Sensabaugh scored 13 points in the first half after scoring 17 and 14 points, respectively, in his first two games for the Buckeyes (3-0).

Key had 10 points and 14 rebounds and Isaac Likekele grabbed 10 rebounds.

Ohio State led 26-20 after a strange first half that had major momentum swings, cold shooting and a duel between Sensabaugh and Rose.

It took Eastern Illinois nearly six minutes to score their first points but the Panthers trailed only 4-2 because each team made one of their first eight shots.

The Buckeyes would run off 14 points in a row for a 21-5 advantage with Sensabaugh and Tanner Holden combining for all of the Ohio State points. Sensabaugh had 10 of them, including a stretch of seven straight to make it 15-5.

Holden, who started the run with a free throw, then canned a trey to make it 18-5 before Sensabaugh drained another triple.

The Panthers would not go away and Rose, who had nine points in the first half, sunk made a field goal and consecutive 3-pointers and suddenly it was 21-13. Eastern Illinois would later pull to within 23-20 but Sensabaugh’s triple with 1:33 left were the final points before the break.

The Buckeyes will head to Lahaina, Hawaii, for the Maui Invitational, opening Monday against No. 17 San Diego State with a possibility of playing No. 14 Arizona the next day.

Eastern Illinois hosts St. Mary of the Woods on Monday.