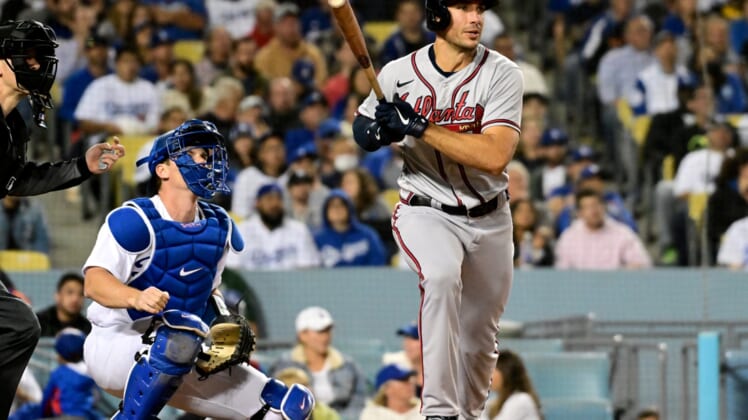 Freddie Freeman’s first home run with his new team came in his first at-bat against his former team and the Los Angeles Dodgers extended their winning streak to seven games with a 7-4 victory over the visiting Atlanta Braves on Monday.

In the first matchup of 2022 between teams that met in each of the past two National League Championship Series, the Dodgers took control with a five-run fourth inning that included a three-run double from Trea Turner.

After going seven perfect innings in his season debut Wednesday at Minnesota, Dodgers starter Clayton Kershaw gave up a two-out single in the first inning to Austin Riley. Kershaw (2-0) wound up allowing four runs on six hits over five-plus innings with no walks and seven strikeouts.

Matt Olson, Freeman’s replacement at first base for the Braves, had three hits to raise his batting average to .452 in the early part of the season.

Freeman’s home run to the opposite field in left came on the second pitch he saw from Ynoa, a 97 mph fastball. The blast came after Freeman hit 271 homers in 12 seasons for the Braves.

The Dodgers built the advantage to 6-0 in the fourth inning, getting an RBI groundout from Cody Bellinger and a run-scoring single from Edwin Rios. Four batters later, Turner hit his three-run double to left field after reliever Sean Newcomb walked Freeman.

Kershaw gave up his first run of the season when Heredia went deep to left field in the fifth inning, his first. Albies hit his fifth of the season to left-center in the sixth. Adam Duvall added an RBI groundout and Travis d’Arnaud had an RBI single in the sixth.