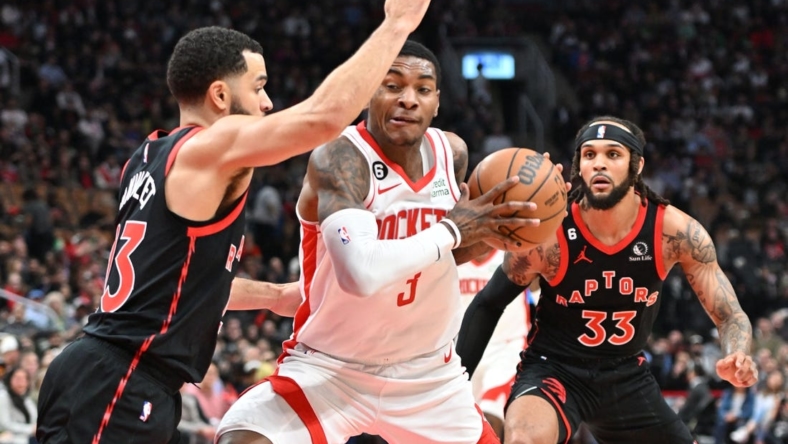 Jalen Green paced the Rockets with 21, though six other scored in double digits. Alperen Sengun had 17 points and eight rebounds, Kevin Porter Jr. had 12 points and 11 assists, Jabari Smith Jr. scored 15 points, and Eric Gordon added 10 as all five starters had at least 10. Tari Eason added 14 points and Kenyon Martin Jr. 13 off the bench.

After a back-and-forth first half, Toronto took a four-point lead into the fourth quarter. Houston scored the first four points of the fourth to tie it, then took a two-point lead on Dalshen Nix’s 3-pointer with 9:48 remaining. With the teams swapping leads for the next four-plus minutes, Toronto got back-to-back 3-pointers from Otto Porter Jr. to take a 106-99 lead with 5:08 to play.

Houston never got closer than four the rest of the way.

The Rockets opened the game with a 37-29 lead after one quarter, then scored the first four points of the second. But Toronto answered with a 10-0 run to close within 41-39, before Houston regained an eight-point lead on Smith’s 3-pointer with 4:30 remaining in the quarter.

Toronto responded, however, with an 8-0 run to close the final 84 seconds of the half. Barnes’s 3-pointer with 28 seconds left gave the Raptors a 57-54 lead at the break.

After leading the game with 20 first-half points, Anunoby had steals on consecutive Houston possessions to help Toronto to a 70-62 lead with 8:13 to play in the third quarter. His first steal set up Trent for a layup; Anunoby scored himself on a dunk after his second steal.

Toronto scored the next four points and held an 86-82 lead after three quarters.

Toronto’s Precious Achiuwa (sprained ankle) left the game in the fourth quarter and did not return. He had four points and six rebounds.