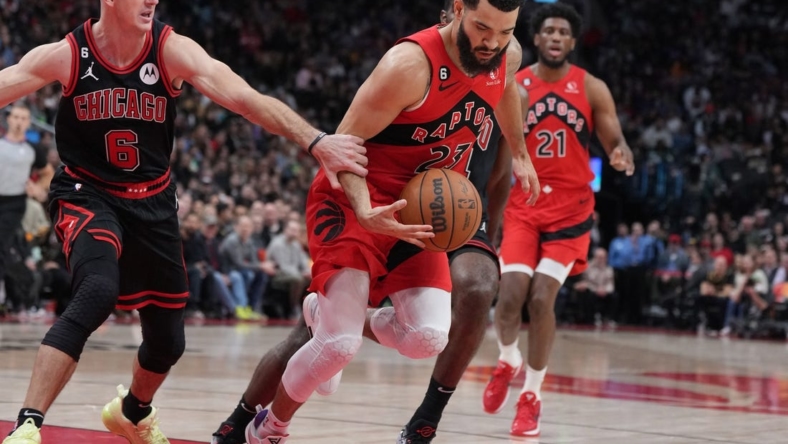 Fred VanVleet returned from a three-game absence and had a season-high 30 points and added 11 assists as the Toronto Raptors defeated the visiting Chicago Bulls 113-104 Sunday night.

VanVleet’s return from a back issue was a boost for the Raptors, who will be without Pascal Siakam (groin) for at least two weeks. Siakam was injured in the third quarter of the loss to the Dallas Mavericks on Friday.

O.G. Anunoby added 22 points and Scottie Barnes had 19 points and 10 rebounds for the Raptors, who visit Chicago for a rematch on Monday.

Gary Trent Jr. scored 12 points for Toronto and Christian Koloko had career highs in points (11) and blocks (six) along with seven rebounds.

Toronto took a one-point lead into the fourth quarter, which opened with seven straight Chicago points. Toronto responded with a 7-0 burst.

Toronto took a three-point lead on Anunoby’s layup with 5:18 remaining in the fourth. Anunoby’s steal and layup with 3:47 to play bumped the lead to six. Barnes increased the advantage to eight with a putback layup with 2:16 left. DeRozan’s three-point play with 2:01 left cut the Bulls’ deficit to five, but that was the closest they would get.

Williams hit a 3-pointer to stretch the lead to 13 in the first minute of the second quarter. After blocking a shot, Koloko made a dunk at the other end to cap a 16-4 run that gave Toronto a 43-42 lead with 4:42 left in the first half. Toronto led 55-49 at halftime.

Trent’s floater and free throw bumped Toronto’s lead to 10 with 9:54 left in the third. Chicago used a 9-0 surge to trim the lead to one. Chicago went on to finish the third quarter on an 11-2 run.