Why a Frankie Montas trade is perfect for the Minnesota Twins 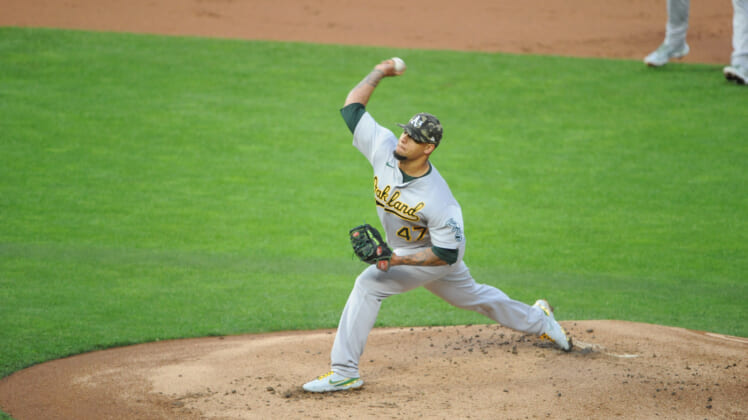 Suddenly the Minnesota Twins are serious about contending right away. By shocking the baseball community with a late-night Carlos Correa signing, chief baseball officer Derek Falvey and general manager Thad Levine have provided Twins fans with renewed optimism to start the year. Yet they might not be done, with their next rumored target to be starting pitcher Frankie Montas of the Oakland Athletics.

Minnesota Twins were down and out before MLB lockout ended

Following a summer extension for Byron Buxton, the organization was in need of an influx of talent to support their $100M dollar man in center field. While they’ve practically overhauled their lineup aside from their young core by way of multiple trades, they cleared a ton of salary off their books in 2022.

This is what opened up the possibility to sign Correa in the first place, but one major hole on the roster remains, and it’s largely why fans were so down on the team to begin with. We’re talking about the same issue that’s plagued the team since they traded Johan Santana to the Mets in 2008.

Although, Kenta Maeda’s 2020 season finishing as the Cy Young runner-up came as a pleasant surprise, for the most part, the Twin Cities haven’t seen anything resembling a staff ace in over a decade.

In this case, the Twins still seem unlikely to chase an ace, because, who’s available at this point? But there is another starting pitcher, or two, who could help stabilize a unit that is in desperate need of improvement if they want to contend in the AL Central.

Minnesota Twins should do what it takes to acquire Frankie Montas

While parting with prospects to win now is a risky approach since you never know what you’re giving away, the Twins have already shown a willingness to do just that this offseason when they traded Chase Petty, their first round pick from 2021.

Now they could be looking at a similar situation to continue adding to their rotation in pursuit of A’s pitcher Frankie Montas. At 28 years old, Montas finished sixth in the A.L. Cy Young voting during the 2021 season.

The likes of other top prospects within their system are being tossed around, such as Royce Lewis and Austin Martin who are ranked 46th and 52nd on the MLB top-100 list of prospects.

If parting with either of these top-ranked Twins prospects is what it takes to land Montas, Sean Manaea, or Luis Castillo from the Cincinnati Reds, the front office shouldn’t hesitate to pull the trigger.

In the grand scheme, Castillo could vie to actually be a staff ace in Minnesota but the other two would slot in nicely behind Sonny Gray forming an above-average 1-2 punch the Twins currently lack.

Owed just $5.2 million in 2022, Montas wouldn’t break the bank, keeping the Twins on track to have a consistent budget from season’s past.

While landing Montas won’t have the same effect as Correa will in a Twins uniform, the impact he could have on the staff could be tremendous. It’s common to have the back end of the rotation up for grabs, but the Twins need to have at least two starters they can hand the ball to, should their lineup be enough to propel them to October once again. Montas solves that problem, without giving up a sure thing.