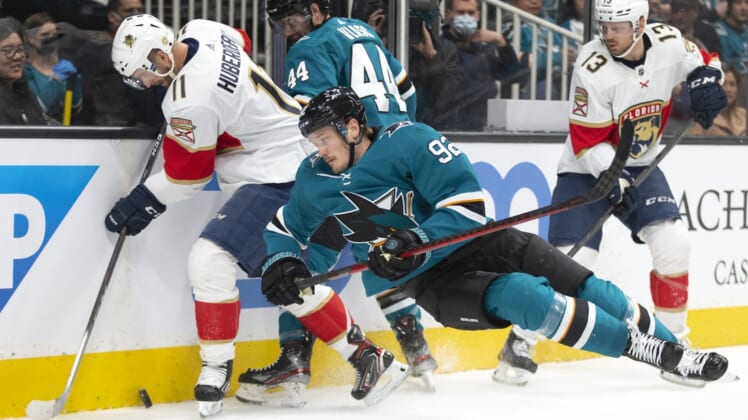 Frank Vatrano scored two goals, including the game winner just over a minute into overtime, as the visiting Florida Panthers rallied for a 3-2 victory Tuesday over the San Jose Sharks.

Jonathan Huberdeau also scored for the Panthers and Spencer Knight had 24 saves as Florida improved to 1-1-0 at the start of a season-long seven game road trip. The Panthers had won five consecutive games before hitting the road.

Vatrano’s game-winning shot from the deep slot beat Sharks goalie James Reimer on the glove side for his 10th of the season. Florida entered the final period down a goal but rallied by outshooting the Sharks 18-3 over the final 20 minutes and overtime.

Logan Couture and Nicolas Meloche each scored first-period goals, but the Sharks but could not get their offense going late while missing out on their first three-game winning streak in two months.

Reimer, who missed the last four games while dealing with a lower-body injury, made 31 saves but could not survive the Panthers’ late onslaught.

In a busy first period, Couture gave the Sharks a 1-0 lead 8:19 into the game when he scored his 20th of the season on the power play off a redirection from just in front of the Panthers goal. Couture now has nine seasons with at least 20 goals.

Meloche put San Jose up 2-1 at 13:58 of the first period on his second of the season when his shot from the top of the right circle beat Knight even without any traffic in front of the goal.

After a scoreless second period, the Panthers tied the game 2-all at 3:29 of the third period when Vatrano ripped a rolling puck past Reimer.

Before the game, the Sharks honored longtime standout Joe Thornton with a video tribute. The 42-year-old, who opened the game on the first line for the Panthers, scored 251 goals with 804 assists over 15 seasons in San Jose, during a run that ended in 2019-20.