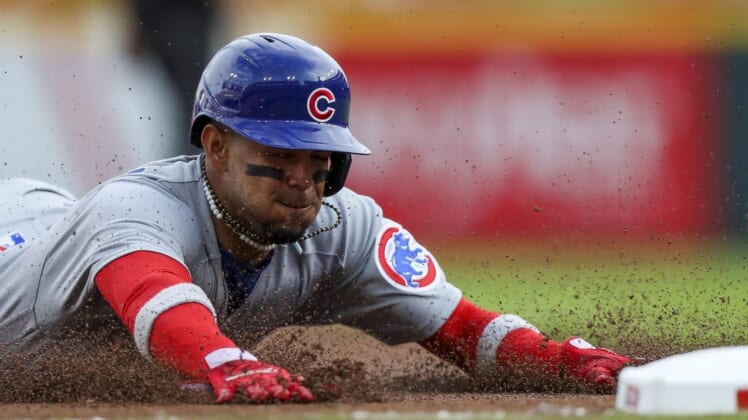 Frank Schwindel homered twice and drove in three while three others had a pair of RBIs apiece as the visiting Chicago Cubs routed the Cincinnati Reds 11-4 on Tuesday night.

The offense was more than enough support for starter and winner Marcus Stroman (2-4), who earned his second win in seven starts by holding the Reds to two runs and four hits over five innings.

Stroman struck out eight and walked two for the Cubs, who won their third straight after a four-game losing streak. Despite giving up two runs on four hits, Robert Gsellman earned his first save of the season and 15th career, tossing the final three innings of the game.

The Cubs have gone deep in 10 of 11 games since May 14, totaling 19 homers over that span. Tyler Naquin homered and had three hits for the Reds, who lost for the fourth time in five games.

Schwindel, who had just two home runs in his first 36 games, has four long balls in his last four games. His two-run shot to right-center off Reds starter Tyler Mahle (2-5) gave the Cubs a 3-0 lead in the first inning.

The Reds came back against Stroman with a pair of runs in the bottom of the first on back-to-back RBI singles from Joey Votto and Tyler Stephenson.

But Chicago re-established its three-run advantage in the third against Mahle when Alfonso Rivas tripled home Schwindel and Patrick Wisdom.

The Cubs knocked Mahle from the game in the fifth when the first five batters reached — the first three against Mahle — and scored. Schwindel opened with his second homer of the night before a two-run single from Andrelton Simmons and RBI groundouts from Christopher Morel and Seiya Suzuki closed out the scoring in the five-run frame.

Mahle was tagged for a career-high eight earned runs on nine hits in just four-plus innings, striking out six and walking three. It was the second time this season Mahle set a new personal high for earned runs allowed in a start.

Cubs pitching retired 13 straight batters before Naquin belted his fifth homer of the season off reliever Robert Gsellman to open the eighth. It was Cincinnati’s first hit since Stephenson’s run-scoring single in the first.

For the second time this month, the Reds used infielder Matt Reynolds to finish the game on the mound. Reynolds allowed a bases-loaded sacrifice fly to account for Chicago’s final run.