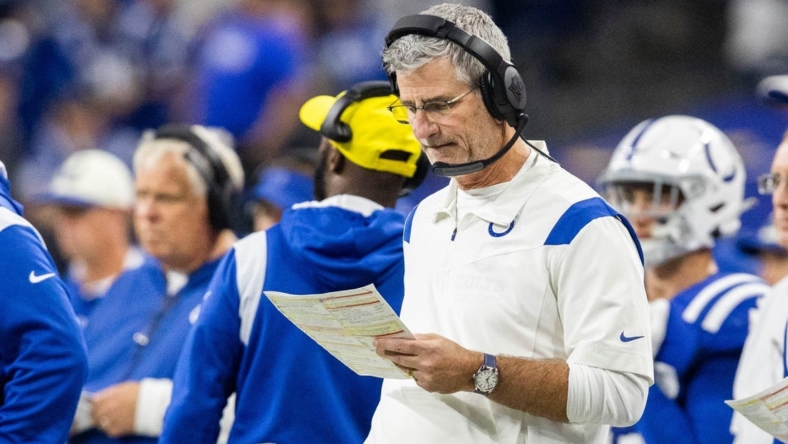 Frank Reich plans to answer the phone and keep his options open while dealing with the painful reality of being fired by the Indianapolis Colts.

Fired Monday five seasons into his tenure in Indianapolis, Reich said he shifted to the role of grandfather and plans to embrace the opportunity for family time the rest of the season.

“It hurts. It hurts to have it happen in the middle of the season,” Reich told CBS4 in Indianapolis. “But I understand the business side of things. I have a tremendous amount of respect for (team owner) Mr. (Jim) Irsay and I’ve come to trust his instincts and his knowledge of the game. I just know he’s doing what he thinks is best for the team. I can live with that. I gave my heart and soul to the job, to the guys, to everything I did there. I didn’t take anything for granted.”

Irsay fired Reich and tapped team consultant and ESPN analyst Jeff Saturday to be interim head coach. Saturday played center for the Colts during Peyton Manning’s prime and has coached high school football. He has never been an NFL head coach.

Reich was 3-5-1 this season, and the Colts changed quarterbacks yet again — from offseason acquisition Matt Ryan to Sam Ehlinger — only to lose consecutive games. They managed three points in the Week 9 loss at New England that proved the final straw.

When he was introduced in a joint press conference with general manager Chris Ballard and Irsay, Reich said he had clear goals — winning the AFC South and winning the Super Bowl. That was when franchise quarterback Andrew Luck was also in the picture.

Luck retired, and the Colts have perpetually spun the carousel at the position each season to install a different starter every year since Luck walked away. Despite the constant churn behind center, Reich had a 41-35-1 record, including 1-2 in the postseason.

“You have mixed emotions. You feel like, ‘OK, there were different circumstances and dynamics and challenges that you faced.’ But as a coach and as a player and as a competitor, you say, ‘That doesn’t matter. We’ve still gotta obtain our goals,'” Reich said. “When Mr. Irsay and Chris (Ballard) hired me, I had no misrepresentations. Those were the expectations.”

Reich, 60, said he is keeping his options open.

“Obviously, my desire is to be a head coach. I love the game,” he said. “I love everything about the game, so you keep all of your options open.”