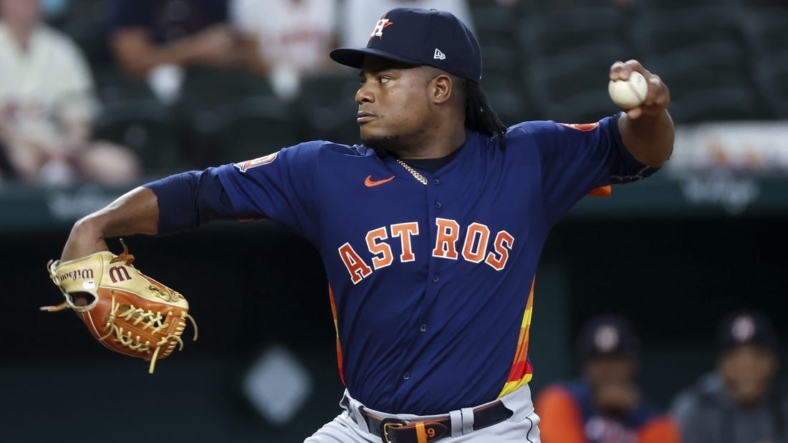 Hunter Brown had already hammered home his point with five shutout innings in his major league debut on Monday against the visiting Texas Rangers, but Houston Astros manager Dusty Baker opted to give Brown one additional inning for one reason in particular.

The Astros were armed with a well-rested bullpen featuring the lowest ERA (2.86) in the majors, giving the right-hander a cushion if he needed it. He didn’t, though, retiring the top of the Texas lineup in order to help give Houston some momentum ahead of a Tuesday matchup against the Rangers as the three-game series continues.

“The first couple of innings, he threw the ball really, really good,” Houston catcher Martin Maldonado said of Brown. “He located the fastball better than I thought he was going to. He was impressive, even from the bullpen.”

Bryan Abreu, Hector Neris and Rafael Montero followed with a combined three perfect innings of relief to complete the shutout. Montero notched his fifth save in six games since closer Ryan Pressly landed on the 15-day injured list due to neck spasms on Aug. 22.

Pressly is primed for reinstatement on Tuesday, when left-hander Framber Valdez (14-4, 2.63 ERA) has the starting assignment for the Astros.

Valdez has recorded 22 consecutive quality starts, the most by a left-handed pitcher in major league history. He is 13-3 with a 2.46 ERA and 138 strikeouts across 150 innings during that span. The southpaw is also 5-0 with a 2.04 ERA in his past five outings.

Rookie right-hander Glenn Otto (6-8, 4.82 ERA) is the scheduled starter for the Rangers.

He did not factor into the decision in Texas’ 9-8 loss to the Boston Red Sox on Thursday, when he allowed three runs on four hits and one walk with a career-high eight strikeouts over five-plus innings.

Otto is 2-1 with a 3.31 ERA over his past six starts, a span that includes a start against Houston in which he allowed two runs on four hits in five innings. He has hit the five-inning mark in each of his past nine starts.

The right-hander is 0-2 with a 4.94 ERA in five career starts against the Astros, including an 0-1 record and 3.52 ERA in three starts this season. The latest two meetings came in Houston.

There might be no better time than Tuesday for Otto to earn his first win against the Astros, as Texas is riding a nine-game losing streak. Monday’s loss was particularly bad considering it was the first time the Rangers were shut out since June 8.

“If we pitch and defend, we’ll be fine,” Rangers interim manager Tony Beasley said. “The offense is not going to be there every night, we know that. We don’t expect to get shut out, for sure, but if we can pitch and defend, I’ll feel good about it.”